The main focus of our expedition was to explore the High Atlas regions, set new routes and develop our personal climbing skills. This included learning and practicing basic mountaineering techniques, such as moving together, rope skills and mountain safety. In the later part of the expedition, we focused on climbing big walls (steep and over 300m per route). This was new to most of us, having mostly climbed UK based routes. This provided a great opportunity for big wall skills, such as hauling gear, making safe hanging belays and also learning to pace routes and exercise stamina.

Between climbing, we developed personal survival and medical skills to ensure safe living whilst moving around the mountains. We aimed to wild camp as much as possible and stayed at hostels or mountain huts in between. When climbing Toubkal and Angour, we stayed at the mountain refuges. These are owned by the Club Alpin Francais, with whom we agreed to climb with whilst staying in Oukaimeden. This was very beneficial to skill development, as one member of the team was a professional mountain guide.

Overall, the trip aimed to improve our independence and confidence whilst mountaineering, but also our ability to overcome issues whilst living in country. We developed personal resilience, problem solving and greater teamwork skills. 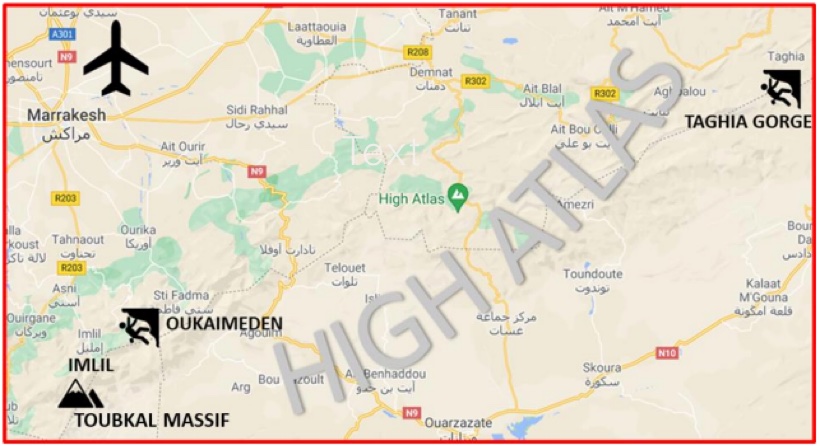 We started our trip in Marrakech for one night before moving into the mountains to a small village located high in the Atlas Range. This was called Oukaimeden and had limited infrastructure. The people living there are of Berber descent and reside in small wooden and stone huts, living a subsistence agricultural existence. Whilst here, we camped outside some villager’s homes and brought food from Marrakech to sustain us for the period that we were staying there. We used water purification tablets to access clean water. The mountains climbed here were Angour (3600m), Mount Oukiameden and a longer trek over several peaks that covered 25km. During our time here, we covered over 300km of terrain on foot.

After our week here, we moved location to a town called Imlil. Living here was less intense in terms of daily living, with us spending the week in a lodge due to camping restrictions. Whilst here, we named and cleaned new routes for sport climbing in the local gorge and spent two days climbing Mount Toubkal at 4200m in altitude. The mountaineering here was easier than in Oukiameden but did provide is with the experience of being at a substantial altitude.

Our final destination was located 6 hours from Marrakech in the middle Atlas Mountains. Our transport was through negotiation with local drivers and mule owners. Taghia was the small village located in this region. We stayed here for a week with a local family. Access to the village is a two hour walk on foot using mules to carry equipment. Here, we worked on big wall climbing and also went canyoning with the son of the family we were staying with.

A significant portion of our trip was spent mountaineering- climbing large peaks with sustained but less technical scrambles and climbs. The remainder was spent big wall climbing, which was more technical but for shorter durations.

Notable peaks were Toubkal and Angour- both around 4000m in altitude. Here we experienced mixed levels of altitude sickness, changes to conditions and weather, navigational challenges and a greater requirement on fitness and stamina. We covered large distances over around 12-13 hours of climbing a day. In between these large peaks, we did some local bouldering and also traditional climbing on some of the smaller cliff faces. We established new routes here which have been logged for future expeditions. 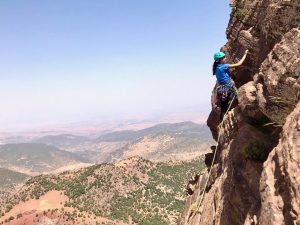 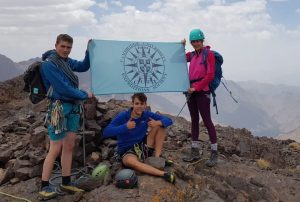 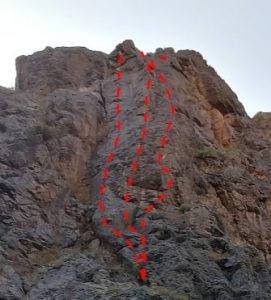 Some of the routes we documented in Imlil.

Big wall climbs were all located in the Taghia region. As a team, we attempted three long routes- 6a+ and 6b in grade. This was a great new experience for all of us, and after experiencing initial nerves, we all managed to top out on at least one route. 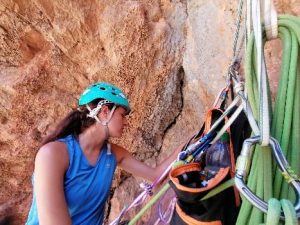 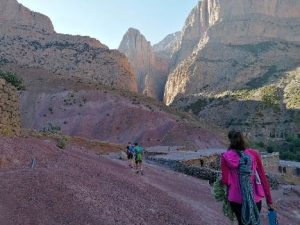 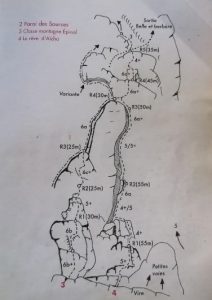 We feel this greatly enhanced our rope work skills and ability to remain safe, especially through the intimidating heights of big wall cliffs. We even encountered a snake part way up one route! More routes would have been attempted in this region had the team not experienced bouts of Campylobacter and issues with dog bites and rabies scares! However, this was an overall very positive experience and fantastic    for skills development.

Whilst the overall trip was successful and all aims were achieved, we did encounter some issues and incidents that required attention. Meeting a rattlesnake halfway up a route required safe assessment of risk- the options were to abseil over 200m or try to work around the route to avoid it. We concluded that due to heat and time; the safest option was to continue.

We also all experienced bouts of gastrointestinal illness at various times. This was mostly overcome through rest and fluids, but two members did require antibiotics, tapping into the supply that we brought with us. This was all assessed as a risk and therefore expected and accepted. 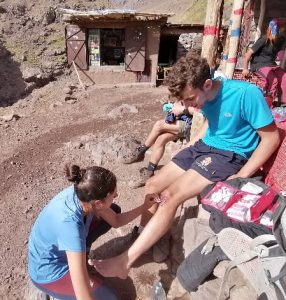 Of course the medic had the first injury!

Whilst walking into a climb, we also encountered a dog who became overly playful and bit and scratched two team members. One member had received two rabies vaccines so decided to remain in Taghia, whilst the other travelled back to Marrakech to receive PEP. Here, he was also placed on a drip as treatment for dehydration from Campylobacter and given antibiotics. He did not return to Taghia due to the time it takes to reach the mountain village.

Some of the key experiences within the expedition were those gained through cultural immersion with the Berber people. The contrasting livelihoods to those in the UK showed clearly that there are different ways to live your life- and still be happy, if not happier. Modern infrastructure was limited, especially in Taghia, yet this did not seem to reduce quality of life. If anything, greater emphasis and reliance was placed on community and networks of people that enabled survival. 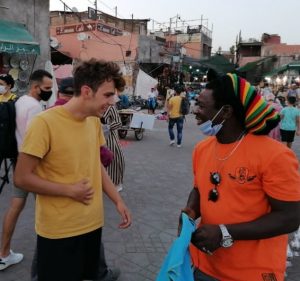 Through sharing of resources, skills and time, the Berber people created systems that allowed for greater equality and ensured that individual suffering was limited. With limited technology, poor privacy within the home and low security, the mountain village appeared to forge greater friendships and had enhanced communication between people, when compared to that of UK. Friendships were also more diverse and intergenerational- it was rare to see a child alone or excluded, and this seemed to carry into adulthood. Children also seemed to be more lively, animated, and interested in their surroundings and in other people. Without research one could not be sure, but mental health appeared to be much better in these communities.

Of course, issues did exist, and this way of life is not perfect. Disease due to poor sanitation was more prevalent and would spread more easily due to the social nature of these communities. Housing quality was also poor in some places, and we could imagine that winters would be hard and encounter some losses from health issues. Diversity within nutrition was also limited and this would impact ability to overcome health issues. However, as a whole the communities seemed to be thriving in many aspects such fitness, ability to overcome adverse situations, resilience, and an overall sense of belonging. 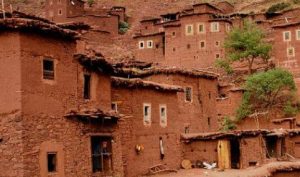 In conclusion, a major lesson learnt on the expedition was that community and increased social belonging seemed to improve the overall happiness and mental well-being of residents. Material wealth didn’t hold as much weight here when compared to these aspects of life. We believe this is a lesson that could also carry importance in our lives back in the UK.

Thanks must go to Cambridge University Expeditions Committee and the Expedition Society for their approval and support throughout the planning process. Also to Sidney Sussex College, Cambridge for provision of grants to Eve Seymour- entirely enabling her access to this expedition.

Other thanks go to grants from the RDC to Joe McDermott and Gabriel Gentile, who also enabled their attendance on this expedition. Further grants were given from the British Mountaineering Council and the Jack Bloor Fund. We greatly thank you for this support.

Finally, thank you to our families at home for the encouragement, support and uk based assistance. 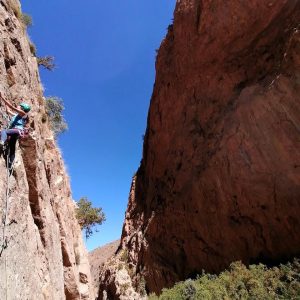