Initially supposed to take place in Stockholm, the tour was a weeklong orienteering camp aimed to give MW17/18 year olds experience on quality terrain, with highly experienced coaches. The week started with the beautiful sand dune areas of Roseisle and Culbin. Both had complex contours (something I really enjoyed). The focus for these days was on direction and picturing, with some head to head races. Keeping on compass was sometimes difficult, especially with the vast amounts of cobwebs in between trees. 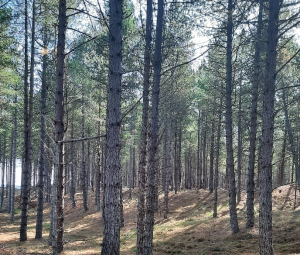 Throughout the first few days, we also had the opportunity to organise an event for other age-group tours and local clubs. This was a great chance to learn how to use orienteering planning software, as well as understanding how much goes on behind the running of an event.

Mid-week, we drove quite a way to Glen Affric. The area was used for the Orienteering World Championship in 2015, so I knew it was going to be an excellent area. The focus was on long legs and how to break them up into more manageable chunks. It was really tough underfoot, but I’d not really experienced anything like it so really enjoyed it. The start was very remote, requiring kayaks and a decent walk to get to.

As we neared the second half of the week, we began to focus more on racing, using the skills we had built up over the first few days. The middle distance race was on an area called Darnaway. The course and area were amazing (probably my favourite of the week), although I did make a fairly large mistake. In the evenings of races we did some race analysis.

Next was the sprint race in Forres. The course we ran was an adaptation of the World Championships course. This made it all the more fun, getting to compare yourself to the very best. We also got to do a night mass start race, which was the highlight of the week for me. We returned to Roseisle meaning it was very quick, and the layout of the race meant those who were behind could skip controls, keeping everyone in contention the whole time.

Aside from the racing, the social side of the camp was also great. To balance out all the running, we also had free time for the beach, river jumping and kayaking. It was nice to meet and get to know other juniors of similar ability.

So, even though the training camp had to be moved to Scotland due to COVID, the tour was still an unforgettable week, with amazing areas, races and people.