I am very grateful to the Jack Bloor Fund for supporting my RYA Senior Instructor course which took place at Rockley Point Watersports, Poole in April 2017.
Growing up by the sea in Devon, I volunteered as an Assistant Instructor at my local sailing club from the age of 14 and completed my RYA Dinghy Instructor certificate two years later. I have since moved to study in Leeds and joined the University Sailing Club, where I began instructing on inland waters, before taking on the role of Training Coordinator for the 2017-18 period.

The RYA Senior Instructor (SI) qualification allows individuals to supervise the delivery of courses within National Sailing Scheme and permits them to operate as the Chief Instructor at a Registered RYA Training Centre. The course is an intense 4 days, bringing together candidates from a range of sailing backgrounds and includes lots of theory despite being incredibly practical!

As part of the SI qualification, I also had to pass the RYA Safety Boat course, update my First Aid course and complete the RYA’s online safeguarding course.
I was fairly nervous before travelling to Poole for the course in April. Having been busy with university studies right up until the week before, I had just about managed to complete the infamous 60 page ‘SI Workbook’. This workbook includes sections such as the ‘Catastrophe Clinic’, planning course delivery and writing Standard Operating Procedures all of which are topics explored during the course, which was run by 4 RYA Coach-Assessors.
We were lucky to have a week of bright sunshine and light winds which made things a bit less stressful as the conditions were perfect for teaching. On a couple of days the wind was particularly light (but 18 grown adults performing a ‘wind dance’ on the beach seemed to please the weather gods enough for a suitable sea breeze to fill in).

During the week we alternated between the roles of ‘students’, ‘instructors’ and the ‘Senior Instructor’ (aka big cheese) while running sessions on the water. All the candidates on the course were experienced instructors so the coaches’ expectations of personal sailing ability and instructing skills were high.
The focus was on developing skills in briefing, debriefing and ‘adding value’ to sessions in the role of Senior Instructor. After each session, instructors would debrief students, the ‘Senior Instructor’ would then debrief the instructors and finally the coaches would debrief the ‘Senior Instructor’! Lots of feedback through the course and continual assessment led to plenty of development points – but thankfully with a bit less pressure than I had anticipated.
I was tasked with running several sessions focused on racing starts, roll tacks, mark rounding, rudderless and centreboardless sailing. A highlight of the week was when I was placed in the role of a Dinghy Instructor taking a student on a ‘1:1 spinnaker masterclass’ At high tide, my ‘student’ (who happened to be an experienced catamaran racer) had no problem blasting across a mile long expanse of Poole Harbour. Despite being the world’s second largest natural harbour, it has an average depth of 70cm at low tide. While our wide grins were probably visible from Southampton, our antics made things a little stressful for the ‘SI’ of the day who was frantically trying to keep all 15 dinghies in a tight sailing area under the eagle eyes of the assessor!
Alongside the waterbased aspect of the course, there were theory sessions covering a wide range of topics including educational theory, dealing with underwater entrapments, bad weather alternatives, the structure of the RYA, ‘better’ standard operating procedures, risk assessments, RYA Inspections and running a Training Centre. We also planned the delivery of an Assistant Instructor course (rather nostalgic as this was where my instructing career started on a cold January weekend in Exmouth 6 years ago).

Throughout the course, we had spontaneous ‘Fun Quizzes’ (read ‘tests’) where the Coaches assessed our knowledge of a broad range of (sometimes obscure) sailing topics, including pilotage, meteorology, racing flags, the RYA and aerodynamics. For example, “name five animals found on a boat”: leech (the back of the sail), gooseneck (where the mast joins the boom) and ram’s horn (a ring on a yacht for making the sail smaller in bad weather) and I’ll leave you to try to think of two more…

Many of the other candidates on the course had commercial instructing backgrounds and I thought beforehand that my volunteering background might make things harder – however it proved very useful as my broader sailing background from racing dinghies, yachts and keelboats, as well as experience leading groups walking, climbing and orienteering really helped with these ‘Fun Quizzes’.
At the end of the week, everyone had one to one debriefs with the coaching team to find out whether they had passed or instead been action-planned for further training. With a 50/50 pass rate, this was one of the tougher courses I’ve done, but it was great to find I had passed subject to completing my Safety Boat course back in Exmouth the following weekend.

After two further days powerboating around the River Exe, righting inverted dinghies, towing kayaks and rescuing tangled kitesurfers, I had ticked the final box. The RYA Safety Boat course is probably some of the best fun you can have on the water in a weekend – highly recommended as a next step from the prerequisite Powerboat Level 2 certificate for anyone who spends time between the wheel on the water.
With my new qualification, I have got exciting plans to run more courses with Leeds University Sailing Club for beginner right through to advanced levels. The club has had a very successful year on the Team Racing side of things, travelling to the BUSA Finals at West Kirby SC while I was in Poole. We are hoping to develop the club’s training side to attract new members to the sport by running more courses in the next year at West Riding Sailing Club near Wakefield.
Once again, I would like to pass my thanks to the Jack Bloor Trustees and everyone who has supported the Fund for helping me to complete this course and take my next step on the instructing ladder.

I competed at the Jack Bloor Fell Races this year (my first experience of a ‘proper’ Yorkshire Fell Race) and thoroughly enjoyed it, despite several head-over-heels tumbles into, luckily rather soft, wet grass! I am also informed that I was the runner who purchased the most cakes following the race (6, I think…) so hopefully that will help support the Fund for others in future years! 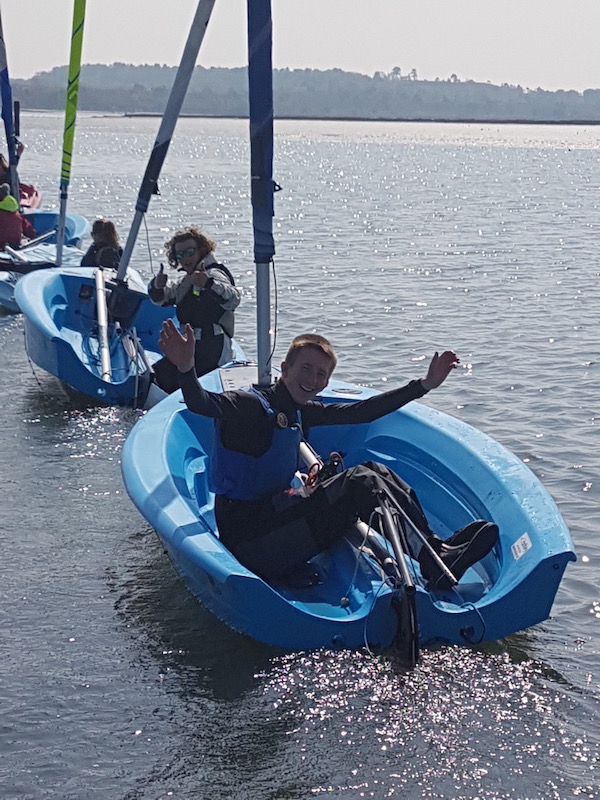 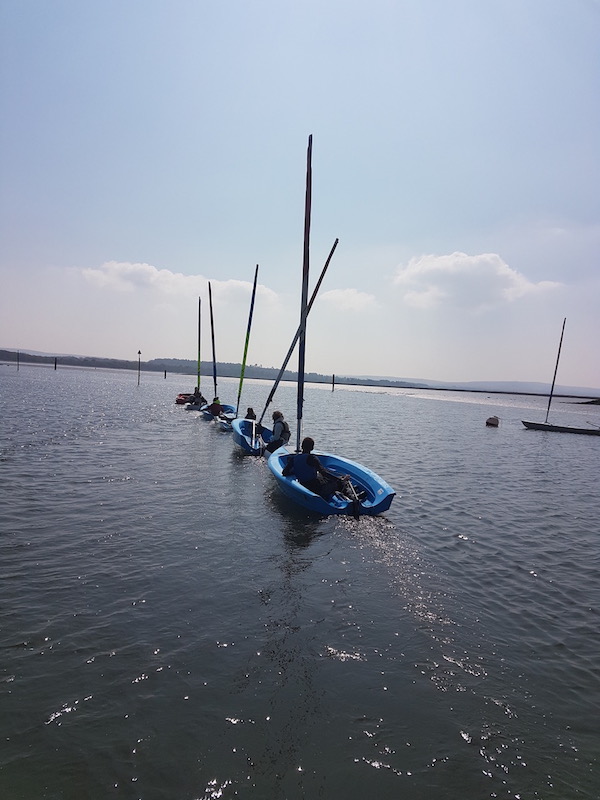 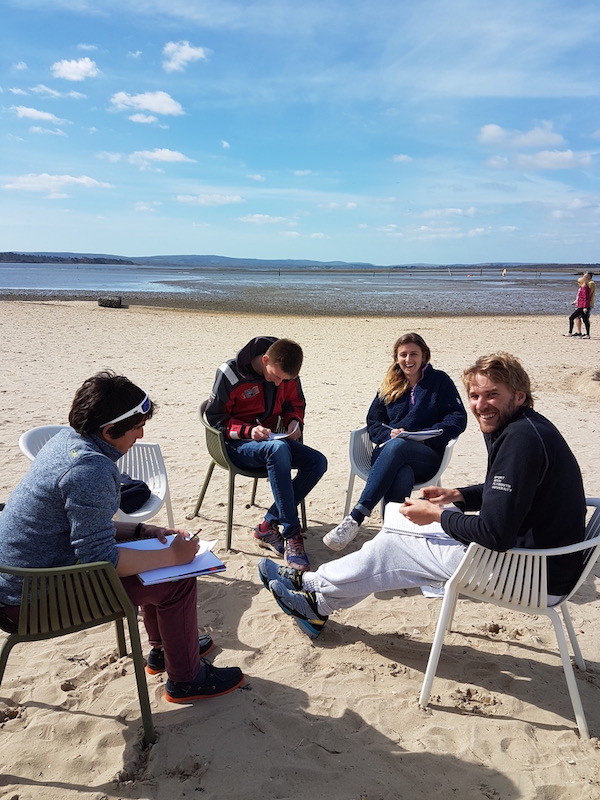 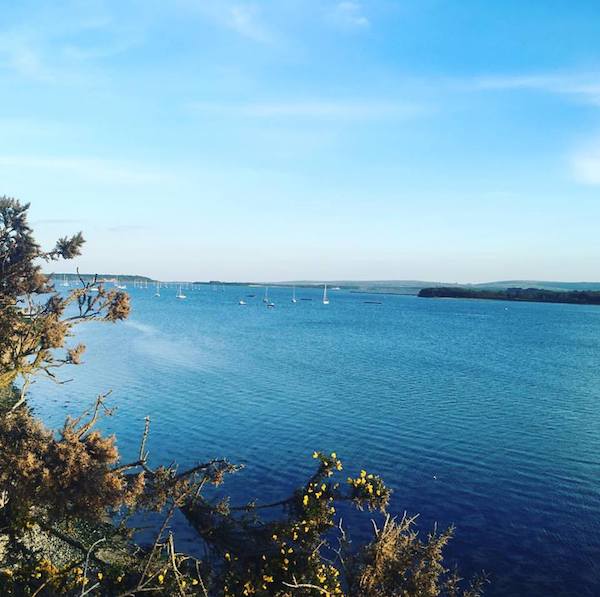