Over the years we have been paddling, we have been lucky enough to experience such places as the French and Austrian Alps along with the beauty of the British Isles, especially Snowdonia. All expeditions have followed previously paddled rivers, detailed and documented by other paddlers before us. In the world we live in now, the concept of first descents are far fetched and come few and far between. This trip to Moffat, a little town in Scottish Borders northeast of Dumfries, was something different, more of the pioneering ilk that we have read about and thought about for some time.

The Birnock Water finds its source in the hills above Moffat, starting out as a collection of drainages, which meet and create a relatively unknown stretch of steep whitewater that runs down into and through Moffat before joining larger bodies of water and continuing on towards the sea. Very little has been said about the Birnock Water and in honesty, the small dribble that runs through the town does not hold too much promise of excitement upstream. Particularly the managed section that runs past Will’s house.

A quick investigation, fuelled by curiosity more than anything else, revealed a section of river that held the potential not only of a good run, but also a first descent.

Near its source, the Birnock Water remains narrow, however years of erosion have resulted in the formation of a gorge-like stretch, riddled with interesting drops, the largest of which stands at around 12ft. Parking the van next to the ancient Moffat well, we hiked a couple of miles into the hills, handrailing the river as best as we could with our boats on our shoulders, until we came to an accessible point that allowed us to climb down to the river side.

A quick scout closer to the river confirmed what a previous scout had suggested, that the river was indeed runnable, with no significant blockages of rocks that would endanger any running of the waterfalls. Leapfrogging each other and taking it in turns to provide safety cover, we worked our way down the river, covering half a mile in four hours. The sides of the river were over grown and thick with vegetation, which slowed us down. We were also in no rush to leave. Isolated in the hills of Dumfries, we felt completely cut off, able to focus on nothing but the joy of running the (until this moment) unknown descent ahead of us.

With the main body of the river done, we found ourselves cruising through a more gentle section , giving ourselves  a moment to reflect on the incredible water we had covered so far. A small drop then introduced another exciting section, initiated further by a small slide and followed by a stretch of grade four rapids.

The successive Moffat Well Falls section was fast approaching. This is made up of another series of three drops, all with tight lines to make without much margin for error. We ran these drops with care after a quick scout from the side. The landing pit was not very large, however enough to stick your boat in comfortably after the short fall, with sufficient space to prep yourself for the next drop. The river calmed down after another couple hundred metres of tasty whitewater and we drifted back into the town and climbed out when we reached the house.

Due to a general lack of water around the Moffat area, and indeed the rest of the Dumfries and Galloway region, we decided that we should venture further north, into the Scottish Highlands. The Etive is a classic river in Scotland and one that all serious British paddlers have to run as it is one of their hometown specials. However, the precipitous Birnock Water had made up hungry for some more waterfalls, so we decided to stop of at the Falls of Falloch en route. The main feature of this river is a straight-lipped 32ft drop with a vast, deep pool and very little consequence at the bottom if you land it right. The only (slight) risk with this drop is that of landing too flat and breaking your back.

Following careful consideration, a good old scout (including a climb down to the lip of the waterfall and a crane of the old neck over the edge of the world), we were ready to fire it up, sort of.

I for one was not quite ready to sit in a boat over this drop; it was too high for me, with the aeration not quite to my liking. Furthermore, I had recently lost a bet, the forfeit of which was to send? a waterfall on a rubber duck. We had a waterfall, we had a duck, and I decided to take my chance.

The thought process as I walked up, with my trusty yellow duck under my arm, was mixed. I could feel the adrenaline moving through me body, and yet when I climbed down into the entry rapid from the surrounding elevated bit of rock, everything went calm. With the duck between my legs, I let the river push me over, it all happened very slowly. As I looked over the edge, I noticed that the duck has slipped in front of me and I was looking at the plunge pool headfirst. Over a period of time that felt too long, I tucked up and rolled over, turning my entire frame around, to land feet first. With my run done, it was time for Will to face the falls.

As a spectator, it happened much more quickly. My main concern this time was not my health, but rather if I could hold the camera still and catch him all the way down. As he came to the lip, I was expecting a clean run, what I wasn’t expecting was an arrow straight fall with a near perfect entry into the water. With almost no splash, I think we were both really impressed with his attempt. Whilst I can’t really express how he felt, I do know that it was the opposite of my gimmicky duck run. It was slick, smooth and looked like something out of a professional production. We watched both runs back repeatedly until the charge on my laptop got low and we drove out of the car park and onto the Etive.

We woke up the next day in a valley that we hadn’t really comprehended. The drive had lasted until the evening, by which point the sun had well and truly disappeared, leaving only the illuminated road directly in front of the van visible. We had aimed to wake up next to the waterfall, the last bit of the famous run, Right Angle.  And incredibly, we had nailed it.

That morning, the backdrop of the immense succession of mountains around us, alongside the 20ft waterfall just metres away from the van, provided a great location to enjoy breakfast.

Eagerly, we kitted up and made our way up the road to the put in of the river. Splashing our faces with water, we slid in and entered Triple Step, a quick sequence of three drop like features. The force of the water didn’t really allow for much time to prepare between the landing of the first drop and the entry to the second.

It was also around this time that I remembered I really should buy a neoprene skullcap. I don’t think I’ve ever been in colder water before; and as a result I had a searing headache for the majority of the run after the dousing I received after Triple Step.

Nevertheless, the rest of the river threw up plenty of surprises, it was twisty, turny and a whole lot of fun.

The river soon became gorge like, with towers of rock either side, hiding you from the eyes of those on the road looking down. Drops of around 8ft in height were scattered down the long profile of the river and were quite exciting to run. Eventually we came to the bottom of the river and were faced with Right Angle.

After a prolonged scout, we had identified the main hazards and highlighted any concerns we had. The main issue was the entry rapid, it is a very narrow s-bending section of violent whitewater, with a rooster tail in the middle that threatens to throw you off balance, which obviously is not what you want directly above a waterfall. The pool at the end of this rapid and that that led into the drop was extremely small. Once nailing the placing of your boat in here, it didn’t take much to push your boat off the edge of the lip. The two of us went for the same tactic, which was to plunge the boat in like a pencil jump, nose first.

Due to the height of the drop, one could have argued that a flat landing, allowing acceleration out of the plunge pool, would have been a good idea. Maybe with a little more water, aerating the water below and also decreasing the height of the waterfall, we would have done. However, we both decided to pencil it instead, eliminating any risk of hurting ourselves upon impact with the water.

The impact with the river below was a little harder than we expected, however, we didn’t get pushed against the wall and we both got out safe, finishing our mini-expedition unscathed and hungry for the next one. 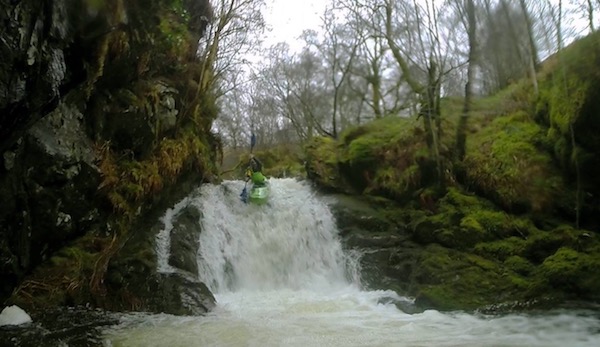 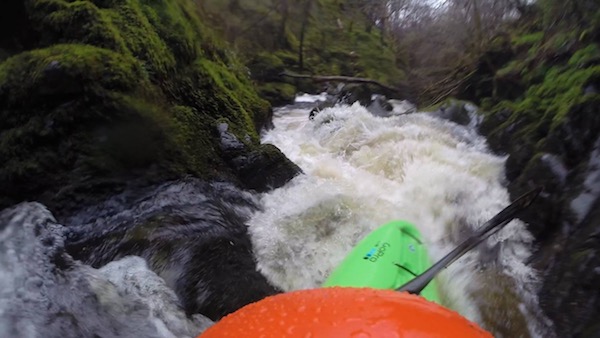 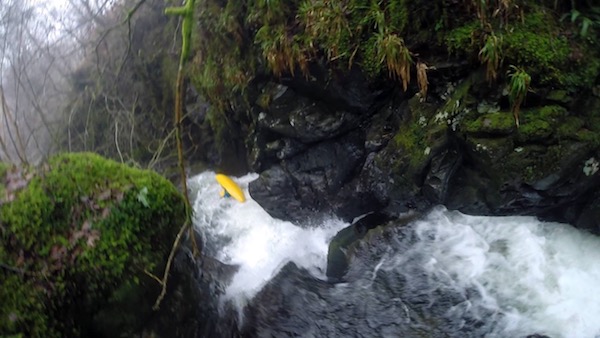 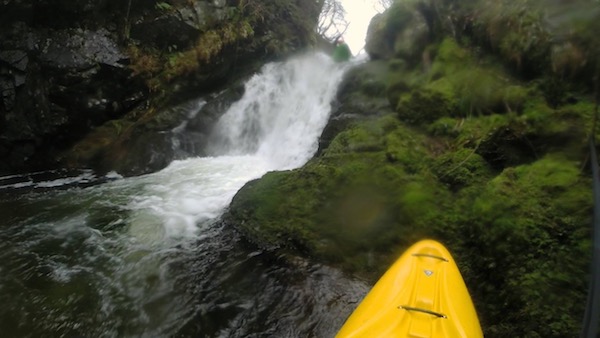 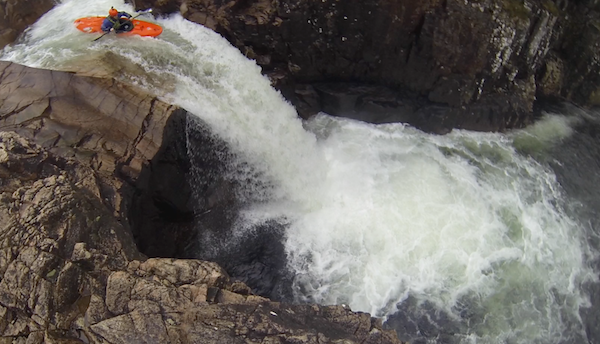 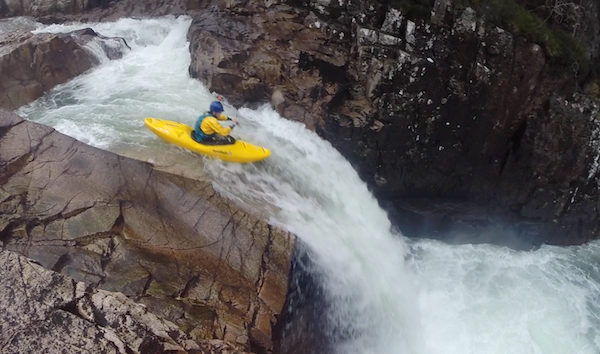