Thanks to the Jack Bloor Fund which made this trip possible.

Alpine kayaking is very different to that which we enjoy in the UK. Here, we brave the elements as precipitation fills the rivers and holds our boats. In the Alps, we hope for sunshine to create glacial meltwater, but despite the sun, we still wrap up warm, because glaciers are cold.

The purpose of our trip was to push and expand the boundaries of our kayaking. Our experience of creek boating was centred in Snowdonia, with various excursions to parts of England and Scotland. The nature of such rivers is small sections of intense rapids followed by large pools, making safety a lot easier to manage as it prevents lost kit from floating too far downstream. Alpine rivers are of a very different nature. The youth of the mountain range allows the topography to remain large and upstanding, resulting in stretches of rapids reaching out hundreds of metres, in some cases kilometres and in some cases, even further. This was a type of paddling we had never experienced before and we relished the opportunity to do what we love in a new environment, in the sun.

We started in Central Burgundy, France, based just outside Auxerre. We spent four days bringing ourselves back to fitness, focussing on calisthenics and getting as much paddling done as possible. All of the rivers in this area, and I think the whole of France (where possible), are manipulated to flow in Paris, at some point either joining The Siene. As such, the rivers are dam-controlled throughout the year to prevent flooding and provide water to the capital. The only river running in this part of Burgundy was Le Chalaux and luckily enough it was only a 20-minute drive from where we were staying. A reasonably simple but technical river, we worked on all aspects of paddling, putting a lot of emphasis on safety training.

Getting caught and held in big holes in the Alps was a real concern as the greater volume of the rivers, especially in Austria, makes even the largest river in the UK look tame. Along with this, we practiced with a throwline by attaching a line to the back of our buoyancy aids and taking it in turns to jump in the largest hole we could fine and rescuing each other by throwing a line in for the other person to catch from the other side of the river. Although unpleasant we thought it was very necessary as there would be no room for error later on in the trip. Even when we were back at base we were testing our accuracy by launching throwlines as far and as hard as we could, trying to hit each other in the chest.

After four days in Central Burgundy, we loaded up the van and drove 18 hours into the Alps to our first destination, Briançon. The journey took longer than expected. From Grenoble a mountain pass runs straight to Briançon and at the rate we were going, we would have seen Alpe d’Huez from the van, something I in particular was looking forward to. Unfortunately upon Grenoble, the pass was shut and we had to drive a further 200 kilometres via Gap and north again to Briançon. We arrived at 0100hrs. It well worth the long trip though.

There were only a few rivers running at the time we were in the French Alps. The snowfall during the winter hadn’t been too good and the kayaking was suffering because of it. Apparently it was much better one month earlier, although arguably a lot more dangerous given the increased volume. We found a river that ran through the town and eventually into the Durance gorge. The Guysane looked remarkably small at first, but we were scouting it out from a footpath 50 metres above it. We were about to move on thinking it wasn’t worth while getting wet for, when we met some other British paddlers who were on their second run. We followed their line and quickly found out that scouting a river from a bird eyes view isn’t the best way to do it if you want realistic impression of the river. Within five minutes I knew it was full on all the way down, powering very stroke and really relying on your edge to bring you about into the eddys. It was awesome. The water was the most sapphire blue I had ever seen, surrounded by mountains in the French Alps, in 40-degree heat. The run went on for about 25 minutes and we hitched a lift back up to the top of the run. Unfortunately the guys we met were heading home so we were left to run by ourselves. I think we did another six more laps, hitching lifts each time from different groups of paddlers. We only stopped because it started to get dark and we were very hungry! We found a quite spot by the river to park the van and chilled out for the night.

We spent as long as we could in Briançon. The paddling was incredible and the rivers were extensive. I think we will be going back next year and staying there for longer. We packed the van and headed off to Val Sesia, an area in the Italian Alps. The drive was a long one and we spent the night in Turin, checking out all the locations seen in the Italian Job, unfortunately driving the van across the weir seemed a little extreme. We navigated our way to Val Sesia using a napkin we had taken from a restaurant. I think it might have been for kids to colour in whilst waiting for dinner. We used it because OS Maps were too expensive and the map we were using was too large for the little Italian roads. After an eight-hour drive, trying to navigate our way up and across, we arrived in our destination and found that the rivers were very empty. We were a month too late. We ate lunch and drove to Landeck in Austria. Hopefully there would more water there.

Without realising it, we were only 10 miles away from the infamous Wellerbrucker Rapids where the annual whitewater world championships, ‘The Sickline’ are held. We had arrived four months early in the peak flow of river, fed by glaciers and the section of river used in the river was un-runnable in every sense of the word. You definitely would have died going down that. The rapids were larger than London buses and the rocks were huge granite boulders creating massive waves and huge ledge holes. Further downstream however, the topography relaxed a bit and allowed the river to settle down as well. We met a German paddler, Florian. He was training for the German National Slalom Team over the summer and showed us the river. We were both determined not to make fools of ourselves in front of him. The stretch of river was the lower section of the Oetzal-Ache. The water here wasn’t here wasn’t as clear as the rivers we had paddled in France. Instead it was grey with glacial sediment and we spent the rest of the days picking stones out of our hair. It was well worth it though. The next day he showed us other sections of rivers in different valleys. All more deadly than the next. We eventually realised that paddling at normal times of the day wasn’t really an option as midday to 1600hrs was the peak flow of the rivers. We instead spent the day looking for sections of rivers that looked tasty and waited until around six o’clock in the afternoon before running them. This way with lower flow, we were able to enjoy what we had come to do without the risk of breaking our boats, kit or bones.

One such river as the upper Oetzal-Ache, a couple of miles drive upstream to the put it. Florian assured us that we were both capable of running the river as it was only grade 4, bordering on grade 5. It was the most intense stretch of river I have ever paddled. You had to be on your game the whole time. Staying in your boat was of the upmost importance, as we knew what lay downstream. The middle section of the Oetzal-Ache is possibly the most effective method of ending a paddling career that I have come across. At this time of year when the glaciers are still in a state of retreat, filling the rivers with meltwater instead of holding it in the ice, that section of river is totally un-runnable in every sense of the term. Huge holes, much like the Wellerbrucker rapids that make the Sickline course downstream, pepper the river like shotgun pellets. It is also a constant flume with no areas for rest or possible eddies to catch. This was not somewhere you wanted to find yourself. Luckily for us our trip down the upper Oetzal-Ache was without fault and found ourselves sat by the van chatting to Florian over a cold beer. I was a bit unsure of how well he knew English numbers as the river in mind was a definite grade 5, surpassing grade 4 by a long way. His response was something along the lines of ‘oh sorry boys, I forgot about Britain. In Austria the grading of rivers is different, what is a grade 5 to you is only a grade 4 over here’. Cheers Florian, could have told us that beforehand! The grading of rivers seems to be logarithmic, changing slowly at the bottom of the grading’s and increasing the magnitude of difference as you move up.

Despite paddling later on in the day, the selection of runnable rivers to choose from was not as rich as we would have wanted. This was further impacted on by a couple of storms with the power to knock over trees…on of which nearly hit the van. The massive input of water made Austria virtually un-runnable, although we did manage to get a couple of laps in of the lower Oetzal-Ache again.

The trip was heading towards the end and we were cutting it close to making our ferry home. We drove north from Landeck, avoiding Switzerland through southern Germany when the van started to break down. The power-auxiliary belt snapped putting pressure on the coolant system. Luckily we had a spare in the back and we were only put back a couple of hours.

All in all, the trip was a massive success and we are currently in the process of planning the next one… 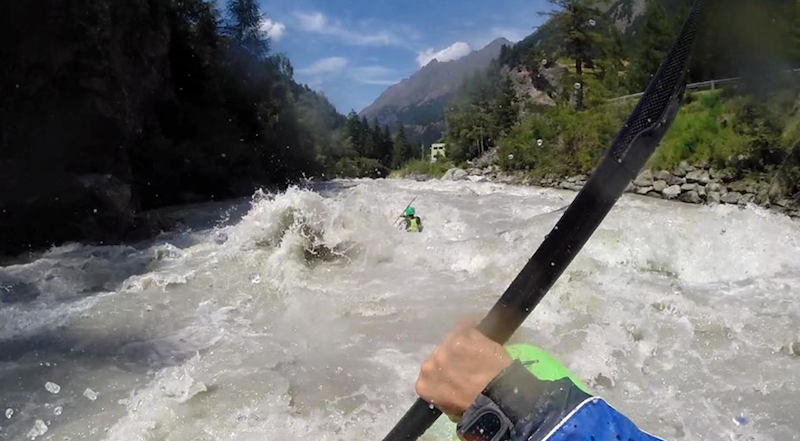 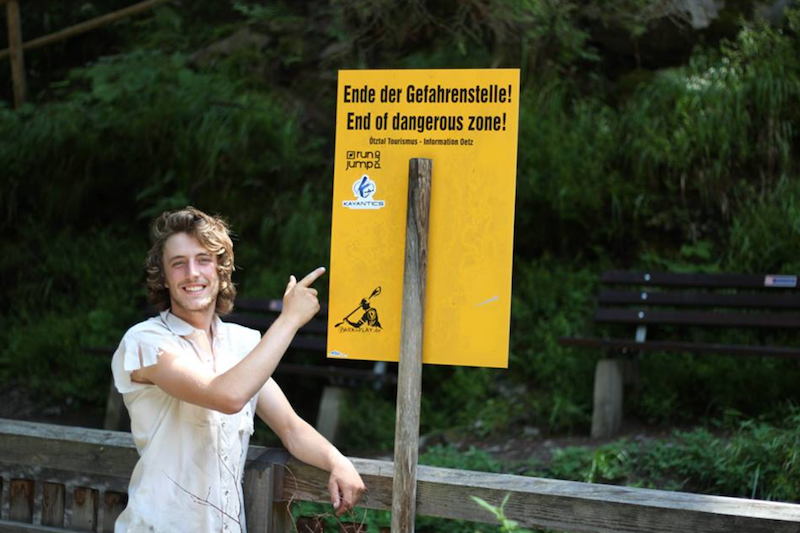 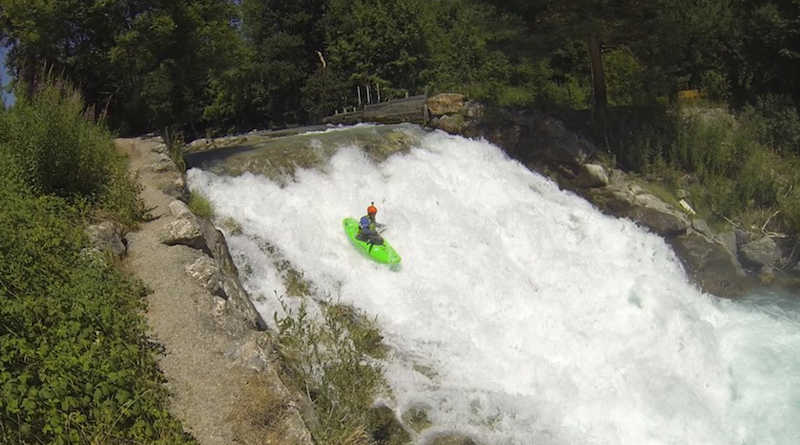