Thanks to the money from the Jack Bloor fund, which I used to buy a membership card so that I could use the facilities at Leeds Met Carnegie, I had a good solid block of training before heading out to the 2014 European Mountain Running Championships (up and down race) which were held in Gap, France.
I wasn’t sure what to expect from the race but I had finished 5th at last years World Mountain Running Championships (also an up and down race) so I was thinking a top 5 position was achievable.
I had my race plan clearly set out in my head, I would sit in with the leaders up the climb and then run as hard as possible down the descent to the finish. On race day I felt good during my warm up so I lined up at the start feeling confident but also very nervous. The gun sounded and everyone set off, the pace was faster than I would have liked as there was a very steep hill at the start of the ascent  so I set off a bit steadier and worked my way through the field during the early stages of the race. About half way up the climb I was in a group with about 4 other athletes at the front of the field and I felt good. At this point I was tempted to push on but I realised it was sensible to stick to my race plan and leave something for later on in the race. I reached the top in 2nd with a Turkish girl quite a way ahead but as we started the descent I knew I was slowly catching her. I soon realised I was going to have to pick up the pace if I wanted to move into the gold medal position. Not too far from the finish I decided to make a move. I soon passed the leader a and from then on I didn’t look back until I had crossed the line. It was a great feeling, I had a huge smile on my face but I also could have cried, I couldn’t believe it!
As well as an individual Gold the Junior Women’s Team also gained a team Silver medal which was the icing on the cake!
Thanks Georgia 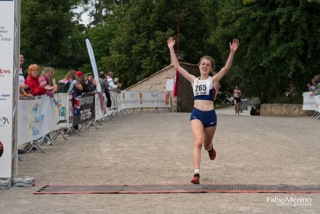