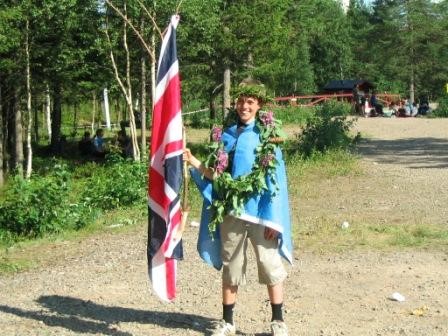 Thank you so much to the Jack Bloor Fund for helping make my trip to the Swedish O-Ringen possible. I developed my Orienteering more in the 10 days we were there than I have in 13 years of running round grotty Yorkshire forests!
My trip started in Sheffield, at 4am, on my birthday. Going to meadow hall shopping centre at that time of the morning wasn’t my ideal birthday treat, but as I found out later, it was all worth it. The coach journey to Stansted with the rest of the Yorkshire Orienteering Junior Squad was very early, but there was already a buzz of excitement and anticipation in the air. Getting through security was uneventful, other than when everyone lost me, as I sped off straight to the gate. But they found me waiting for them when they eventually turned up, so no harm done! Once we arrived in Sweden, the excitement grew. Only 7 hours to go, and we’d be there! Looking out the window of our coach, I was amazed at how much forest there was. It was just forest, forest, forest. We passed through some towns, which just happened to be in the middle of a… forest! And 7 hours later and we’d arrived.
A lie-in the next morning (thankfully) proved an ideal time to explore around our apartments. Again, I was struck by how different everything was. It didn’t actually feel weird or odd, it just had that Britishness missing. Then it was off for some orienteering. Or swimming. Or drowning. In marshes. Lesson No.1. If a piece of ground looks flat in Sweden, it’s a bog. I learnt the hard way. Waste deep. The not-so-marshy bits weren’t that great either. I’m fairly competent at navigating in British forests, but here I was just totally lost all the time. But it’s all part of the fun. I left the forest that day with newfound respect for Swedish Orienteers. Over the next few days I learned how to navigate around Swedish forests. How not to drown, how to map read, how to run. Then the main competition was upon us.
It was a steep learning curve. Small lapses of concentration proved far more costly, so I had to be in control all the time. The competition was a lot hotter too.  I could match the Swedish for pace, but every mistake I made sapped away my physical advantage. I ended up 3rd overall, winning one individual day, in a class of about 150.
Then it was home again, in a coach load of improved Orienteers. Thank you again for making this trip possible. I have improved my orienteering so much, experienced a similar, yet vastly different culture, and proved myself against the best in the world. It was an amazing trip, and one I will certainly endeavor to make again. It is an experience I will carry with me for the rest of my life. Thank you once again,
yours sincerely,
Aidan Smith