My altitude training trip to Colorado Springs began on Tuesday 19th August 2008. The journey was long to say the least being awake for a full 24 hours through, car, plane, coach and bus journeys. After standing under a freeway for half an hour in the dark on my first night ever in America, I got picked up and travelled a short journey to where I would be staying for the next 4 weeks. I was lucky enough to be staying with Gary and Linda Staines, both former Olympians at the 1988 Seoul Olympics who gave me the perfect setting for my training. 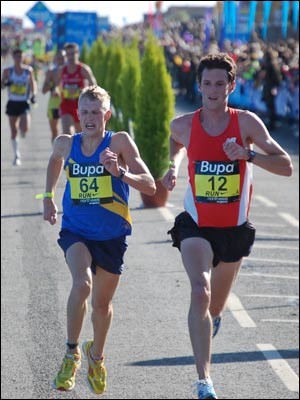 I was based at 1900m and had the mountains literally a 5min jog away and then the beautiful flat trails of Colorado Springs a 5min jog in the other direction. I also had access to a track a short 20min jog away and a gym a short 15min jog away. I also enjoyed completing one of my longer runs in the Air Force Academy which was huge and had its own football stadium. The weather was brilliant, sun and a temperature that allowed me to train in shorts and vest most days.

The first week went great hitting 80miles of quality running, that being my heart rate always at or above my easy zone which has been established through physiology testing. My second week was even better still hitting 80 miles but also including a workout on the track which went totally to plan, a 20min threshold run which I hit perfectly and a 10min threshold run with 8x400m of effort on this amazing dirt track I found which was at 2,000m around a reservoir that gave me about a 1,000m rep. After I discovered this is did all my threshold and tempo runs here, it was perfectly flat and overlooked the whole of Colorado Springs! My easy runs mainly took place in the mountains where I would climb on the way out and run quick on the way back maintaining my heart rate throughout, I was flying!

I had also started to include some easy gym work too, which worked on stability and my supporting muscles rather than heavy weights which I would be leaving until the next phase of my training back in Britain. The 3rd week was again a massive improvement reaching 100miles of quality not including any warm up and warm down running in my total. The week ended with a 18.5 mile run in 1hour 54 minutes that being an average of 6:11/mi at 2,000m in the Air Force Academy, I was on cloud 9!

Monday of week 4 was just as good and was still making huge improvements. On Tuesday evening however my body began to feel the strain and by Wednesday PM I had to drop a run as my right ankle began to play up! I decided to use a local pool, which was actually Cheyenne Mountain High School’s pool where I also did my track workouts and clocked 120 lengths on both Thursday and Friday. On the Saturday I managed to squeeze a session and felt good on my ankle before going to Boulder for the rest of the weekend. This gave me a chance to chill out a bit and see the University of Colorado which is where one of my favourite books “Running with the Buffaloes” is set. This book has given me great inspiration for running and would recommend it to any athlete at school or university! I also got to meet Steve Jones the current British Record holder for the Marathon and Half Marathon whilst relaxing with friends on an afternoon in Boulder.

The following Monday I was to fly home only to be greeted by rain and another 24 hours sleep deprivation but it had all been worth it because the next few weeks were to prove very exciting! My ankle still gave me trouble up until the Saturday of my 1st week back. On the second week that being within the suggested 14-21 days peaking phase from return of altitude, I competed in the North of England Road Relays. I had a great leg and went from 8th to 2nd position on 2nd leg for Leeds City AC. I was slightly annoyed not to come back in 1st but Morpeth’s Chris Sampson had a storming run and battled with me all the way. Leeds City defended their title with a very strong team and the race gave me a huge confidence boost for the following week…the Great North Run, my 1st competitive Half Marathon!

The day after the NOE Relays I hit a 90 minute long run at an average pace of 5:53/mi reaching 15.5miles in the time and my heart rate averaged 150! I knew I was very fit! This was confirmed the following day by physiology testing in Manchester where my VO2max was 84.6 mL/kg/min and my lactate threshold and turnpoint at 5.38 min/mi and 5.11 min/mi respectively which was a huge improvement on my last test!

So Sunday came, judgement day, had I benefited from altitude and was I going to be competitive over Half Marathon. Race day could not have brought finer conditions, sun, and no wind (apart from the huge headwind in the last mile on the seafront, but this I was expected) I set of with the chasing pack feeling very comfortable with the likes of Dan Robinson, Ian Hudspith and Matt O’Dowd. We went through the 1st 2 miles in 9:30 and my next mile was 4:48 this was well below 65 minute pace so deciding to be sensible as it was my 1st Half Marathon I backed off! I felt strong all the way and passed my team mate Alan Buckley, World Cross Country Representative in 2007, around 15km. At 11 miles I felt like a bull and took off for the finish leaving everyone around me! In the last mile I cruised and reeled in Collis Birmingham of Australia to cross the line 4th Brit, 20th Overall out of the 52,000 participants and a huge time of 65:46. This was a great result and what was even better was that I felt strong to the finish there was definitely more in the tank and feel I could have gone with the leading Brits. 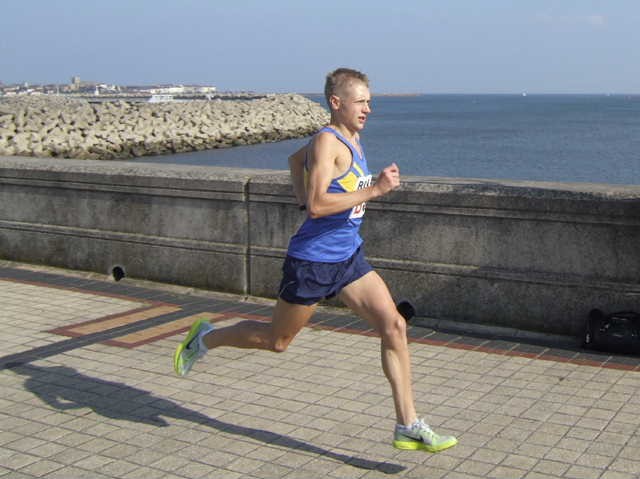 Everything is now on target and the GNR confirms my fitness and the benefits I gained from altitude. I will now take this great base in to my quality phases in my build up to the European Cross Country Championships where I trial for the team at Sefton Park, Liverpool on Saturday 29th November!

I would like to thank the Jack Bloor Memorial Fund so much for the support they gave me for my altitude training trip. I appreciate this unbelievable experience that I was fortunate enough to undertake and can’t explain in words how much it has helped.