In May 2022 I attended my Mountain Leader Assessment in Snowdonia. This is a qualification which I have been working towards for the last couple of years, and I am incredibly appreciative of the support from the Jack Blood Fund.

The five-day assessment kicked off with a day in the Crimpiau area of Snowdonia. We spent a full day on the hill, completing micro-navigation legs and discussing emergency and extrication procedures for group leaders. This was a good warm-up for the rest of the week, and an indication that the hard work I’d put in over the preceding months was going to pay off. The next day saw some pretty miserable weather coming in. Not the kind of day to be stood around, but that’s exactly what we did as we had all the emergency rope work skills and steep ground management to demonstrate. Despite an early hiccup when spotting the assessor on steep ground (which I rectified later on through a second chance) the day went really smoothly. The assessor chose me to manage the whole group on the only section which we actually needed the rope, rather than in artificial circumstances, which I took as a major indication of his trust in my ability.

Over the next three days we undertook the ‘expedition’ – a three-day, two-night trip with wild camps both nights. On the first day, we took in Snowdon via the Ranger path before dropping down into Cwm Tregalan for the camp. Once the sun had set, we set out on the night-navigation element of the assessment. This is the part which candidates are often most nervous for, however the is the component which I spent the most time practicing and so it went very smoothly. We did have perfect conditions for it, with 50m visibility, so there were no real excuses! On the second day we looped around towards Moel Siabod before cutting back to Pen y Pas and camping in Cwm Glas. The second round of night-navigation went just as well and at this point I was confident that the week had gone well. I spent the night camped on a little island in Llyn Glas, but woke to the stepping-stones completely submerged after a night of heavy rain! The final day was short and sweet and we made it back down to Llanberis for a big fry up in Pete’s Eats by midday.

All in all, I was really pleased with how the week went, and delighted that I passed the assessment. Thank you so much again for all the support, it’s really appreciated!

1 – me prepping the rope on the rock step.

3 – the rare sight of sunshine for the week! 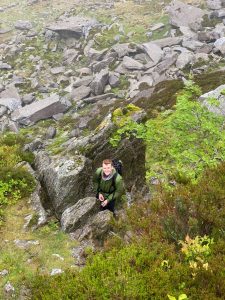 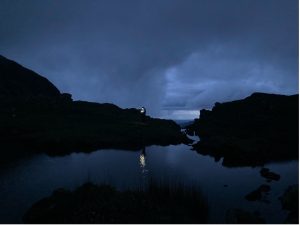 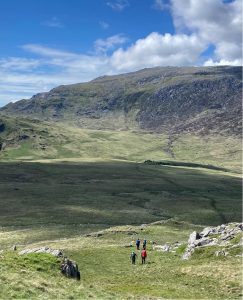