This year I felt incredibly lucky to be selected to run at the World Cup round 2 in Sweden. Not only was this going to be my senior debut for GB, it also gave me the opportunity to travel abroad, something I haven’t been able to do for a long time.

I had barely picked up a map in the past year and my achilleas had been playing up for the few weeks before. I was reasonably fit but I knew my navigational skills were rusty. I hadn’t put too much pressure on myself to aim for international competitions this year as I wanted to focus on my final university exams which took place in the month leading up to the selection races. It was therefore a pleasant surprise to be called up and told I’d be running both the Long and the relay at World Cup.

It was good to have something to focus on again. My aim for the next month and a half was to squeeze in some quality running sessions and get orienteering as much as possible. Luckily for my I had entered the week-long Coasts and Islands competition on the West Coast of Scotland and the Scottish 6 Days (now only 3 days). I used these two weeks to get my legs used to running in terrain again and to work on my technique.

The World Cup Round 2 was to be held in Idre Fjäll, a ‘mountain’ resort about half -way up Sweden. After getting out on the model map twice, I quickly realised this was not your typical Scandinavian terrain. The long area was on the lower slopes of Nipfjallet. The area varied from vague and sparsely forested slope to areas of extremely intricate contour and rock detail. One area was so infamous for people getting lost it was nicknamed the ‘Bermuda Triangle’.

I will admit my nerves were quite high before the Long. This was only my 3rd W21E long ever and it was in some incredibly challenging terrain, both physically and technically. My strategy was to focus on the navigation and not the speed, as I knew time losses due to mistakes would be far more costly. Unfortunately, I had a shaky start with a poor direction to the first control. I tried to reset once I found it and made a proper plan for the next long leg. I had another small miss in the middle of the course but also executed a lot of tricky controls that involved crossing vague areas very well.

There was a map change at the spectator run through where fatigue was starting to set in. On picking up the next map, I had to do a double take when looking at the next leg. It was a long one with 200m of climb across some very technical terrain into the Bermuda Triangle. It was definitely a test of concentration, as the further up the hill the deeper you were into oxygen debt and the more technical it got. Amazingly, I nailed the control by sticking right on line and ticking things off. There were then a few controls in the complex section, which I must have relaxed a little too much for and had another narrow miss. The rocky terrain meant it took me a while to relocate and resulted in another significant time loss. The last few legs were back down the hill across rocky ground. After my mistake I tried to reset and told myself the quickest way to the finish would be to get back cleanly.

It was a very long day out in the forest for me, ending in 67th position out of 99 runners. Initially I was very disappointed with my technical performance but watching some of the GPS traces of the best athletes, it seemed everyone was making mistakes. Looking back, there were many tricky legs I executed really well and many lessons to learn from those I didn’t. It was a tough introduction to racing at a senior international level, but I’m happy to get another elite long distance under my belt.

Since I wasn’t running the middle, I had two days to recover in time for the relay. I was running second leg for the second team. This was my first relay since Junior World Champs in 2019 so it was so great to feel the anticipation and excitement again. My first leg runner had a brilliant run. I was starting on my own but knew there was a group close behind. I ticked off the first two controls nicely. I lost confidence to the 3rd control having caught a Czech girl who wasn’t running on my line. A small hesitation meant I got swept up in the chasing group as we headed up onto the very intricate slope that had been the scene of many people mistakes the day before in the middle. I identified a very tricky leg coming up and made a plan as we climbed. Confident, I set off diagonally down the slope with a Norwegian runner. After a while I felt I had lost contact with the map slightly and the alarm bells started ringing. The Norwegian I was with ran on so I kept going on the chance it was round the next spur. Eventually, I decided I had gone too far and began to backtrack until I found the control. Looking back, my GPS trace passed straight through the centre of the control circle so I must have been so close to the control. Still, I should have executed my plan better. Having now lost the group, I tried my best to be clean for the rest of the course.

There was a lot of lessons to learn from this competition and I’m excited to use the rest of the season to put them into practice and run a race I’m proud of. I’d like to thank the Jack Bloor Fund for helping me cover the cost of this competition and all the COVID tests that came with it 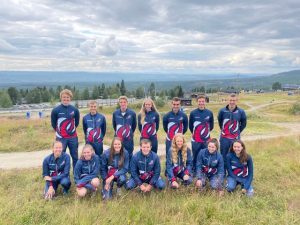 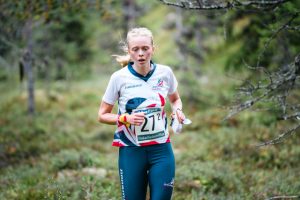