Unfortunately this years race was cancelled due to COVID-19 however we did hold a virtual race and the lucky winners drawn out of a hat will be able to collect their small trophy at the 2021 race.

WINNERS TO BE ANNOUNCED WHEN 2021 RACE IS CONFIRMED 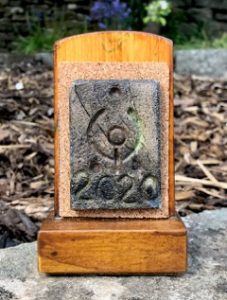 This years trophy is called the Alarm Clock Rock Below, which can be found on Addingham Crag, grid reference 0767 4726

The Small Trophies have been presented at the Jack Bloor Races since 1985. Pat Bloor initiated the idea of using a rock carving from Ilkley Moor for the overall winners trophies and for the small trophies, which have become a unique feature of the race.

Every year we select a different stone carving and produce a small trophy which is presented to each class leader to keep.

Thanks to James Fonquernie for making the trophies every year since 2007.