Those are my usual thoughts before I start any race, and the World Duathlon Championships were not any different. Well, apart from the fact it was obviously the World Champs. AND it was situated in Penticton, Canada, halfway round the globe . OH, and it was probably the biggest race I’ve been in since I started Triathlon. But aside from that it wasn’t any different ! 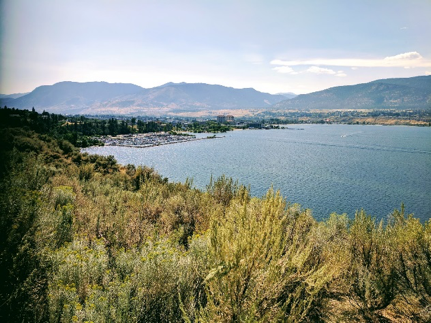 Ideas to enter for races like these always come up spontaneously in conversations with triathlon friends, and this idea popped up around January time, where I decided to enter Stockton Duathlon last minute. I was never that entertained by Duathlons (Run,Bike,Run) as my forte has always been in the swimming and running (which is called an Aquathon), rather than the biking discipline. Nonetheless, I decided to enter Stockton and finished 7th, which got me through qualification to Canada. From then on the preparation for the trip began – extra swimming teaching hours to pay for the ludicrous cost of entry (not to mention the plane ticket prices), and a whole summers worth of training scheduled in so I could peak for the race. This entailed around 4 swims, 5 runs and 3 bikes a week. I did not have long to develop my bike handling skills, so I decided to join the local cycling club and engage with some group Chain Gang’s and it was only at this point where i started to see the excitement of the bike – the countryside rushing past you, the wind howling in your ear, and most notably, the burning in your thighs!

Training weeks completed, it was time to travel to Penticton – an 8 hour flight, followed by a 1 hour plane journey to Penticton. Stepping out of the plane it was hard to appreciate the stunning views; as the town had been blanketed by a smog from a local forest fire. It was like the smog had heightened the nervous anticipation building up inside me, as with nothing to admire, all I could do was think about the race. Eventually the smog cleared to reveal what I considered as semi-Oasis – arid landscape with sparse trees, but a picturesque town with a crystal clear lake nestled in between mountains.

We (my best mate Adam was racing too) carried on training for the next few days before eventually race day arrived. It was a classic triathlon styled event – wake up ridiculously early to go prepare transition, and then start racing early. This time I was glad it was so early though, as by the 6:30am race start it was already 20 degrees celsius. My plan was very laxed – I knew I had to be in the lead group by the end of the first 5km run, then I would see what would happen on the 20km bike leg, and the final 2.5km run was just give it your all. And so the countdown began – the adrenaline rushes through your body and heightens your senses. By “1” all of your thoughts stop and you just GO.

The 5km planned out very well, I situated myself straight into the lead pack, and kept on using the water stations. I knew I had to keep myself cool for as long as possible, because it would make an impact further on through the race. By the end of the 5km a lead group of 8 had been formed, and all were eager to have a good transition. Mine was fairly diabolical. Arrived in first and left last, mainly because I couldn’t clip my helmet strap in quick enough. Regardless of this, I made amends by having a good flying mount onto my bike and made sure I jumped onto the front of the pack. The 2 lap bike course was uphill for the first 5km – which split itself into a

very steep section, then a flat plateau which u-turned back up onto the hill , and then the final 5km was pretty much straight back down. I was very anxious about the hill as I knew people would try make attacks – but my training paid off well as I had the strength to keep myself in a strong position in the pack. By the time we hit the u-turn, I had managed to put in a push and we had a lead group of 3 – myself, Adam and an American. We were trying to push home our advantage on the bike, so when the next section of the hill arrived I wanted to push hard again. Unfortunately Adam couldn’t hold the wheel, so I had to start working as a pair with this American to build up the lead – and this worked well, by transition we had built up well over a 2 minute lead! What was better was that I found out he was age group above, so all I had to do was finish – simple right? Oh no. That was one of the worst 2.5km runs I have done, and all I was trying to think was the next step… But before I knew it the finish was upon me, 1st place in 20-24 age group and 3rd overall in age group. I was just surprised to be honest – what I considered my weakest discipline, turned out to be my race winning advantage!

I had a week’s rest before I had my following race – the Aquathon. A 1km swim followed by a 5km run. A strong British contingent meant this race was going to be really hard the whole way – a man it was ! The race begins and everyone is dolphin diving because the water is too shallow at this point. And just my luck, on the first dive my goggles fall off – classic! What made that even better

was that I was wearing my contact lenses and one decides to go for a swim (quite literally). So the rest of my swim turned into a squinting contest to keep my direction correct – maybe this helped alleviate the pain of swimming fast !? T1 was a much better improvement from my Duathlon antics and I hit the run. Again it was hot so I made sure I kept grabbing fluid from the stations to cool me down (make sure you don’t grab the sticky orange juice like I did). It was a 2 lap course, and initially I had a group of 2 chasing down my lead. I tried maintaining a solid running cadence, and by the time I turned for the second lap I had one GB triathlete around 10s behind me. I knew that my sprint finish would be slow as I was fatigued, so I had just had to push my pace with 2km to go. It’s a horrible feeling because you know you still have a fair amount of running to go, and yet you have to run faster. Every muscle in your body is saying shouting pain, but the brain still persists – forward. By the last 200m the crowd reaction reveals all; I turn to see my lead has increased, and so all that is left to do is the blue carpet and sprint for home. 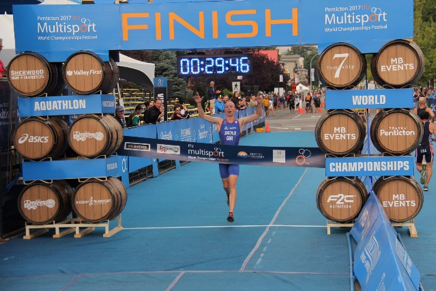 Pain, relief and enjoyment all moulded into one. Initially the feeling is of shock that you have managed to achieve what you set out to be unrealistic, but reflecting back a few weeks after the races I have started to understand that what was actually more important was the journey to get there and not the result – and this is influenced by friends, family and coaches. Individual results are not really individual; of course you can’t let someone else start the race, but you can be sure that your team will be with you every step of the way, all the way to that finish line. 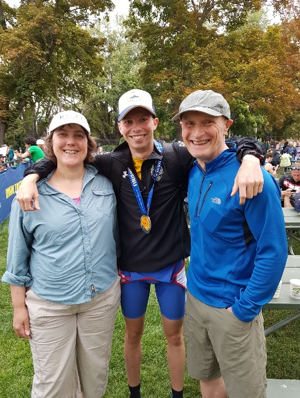 I’d like to thank my family – Mum, Dad and Katie, my coaches – Josh Dennis, Brian Aggett and Greg Hull, my friends – Adam Thorpe and Emma Beckwith, and lastly the
Jack Bloor Fund.