This year the Junior European Cup was being held in Scotland in the areas surrounding Aberfoyle and Stirling. It was sandwiched on the weekend between the Junior Inter Regional Championships where I ran for Yorkshire and the Junior home Internationals Where I ran for England. This meant I had to manage my recovery, training and tapering well to avoid getting ill or injured throughout the period of competitions.

The first day was the sprint discipline at Stirling University Campus. I had managed to do some ‘geeking’ of the map so felt I had a good feel for the area, however they warned us that they may add some temporary uncrossable barriers so I still had to be prepared for them. I was one of the last in my age category to start, however because we had been in quarantine since the races began I had no idea how everyone one else had done.

In the last minute before setting off I reminded myself of my new approach to racing; just find all the controls. I took it relatively steady to the first few controls, which were short and required quick decision making and planning. We then had a long leg, which provided the opportunity for good route choice. I think this was the ‘make or break’ leg for many people. I had planned similar legs in my preparation so quickly decided on my route and then had the opportunity to pick the speed a bit. From then on I just focussed on each control, one at a time. When running through the spectator control I just blocked out the commentary so still had no idea how well I was doing. I was then running towards the last control with everyone cheering still unaware of the position I was in. I crossed the finish line before tuning in to the loudspeaker and hearing that I had finished 1 second behind 3rd position! My immediate reaction was frustration but that didn’t last too long. 4th position was more than I could of asked for and it has given me so much motivation for next year now I know a medal is possible. 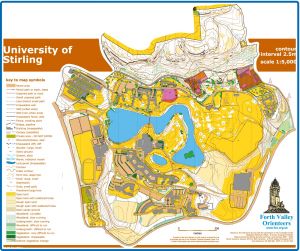 The next day was the relay. I was running 2nd leg but because I was one of the younger team members I was in the 3rd team so had no pressure on me. I set off with a few competitors but had a slightly different course and then made a mistake quite early on which meant I lost the group and was running on my own for most of it. I came in to be told that my first leg runner had misspunched and had therefore been disqualified. It wasn’t great news but it meant I wasn’t too annoyed with myself for having a bad run.

The last day was the long distance race. Unfortunately it went a similar way to my European Youth Championships long distance earlier in the year. I seemed to forget the basics, which resulted in a silly mistake that lead me into a load of wind blow. Instinct told me to carry on but it just got worse so eventually I decided to climb out the way I had come in. Knowing I had already lost a lot of time made it hard to carry on racing mentally but nevertheless once I had passed through the spectator control, I had a little more motivation to keep pushing until the end.

There were definitely some lessons learnt from this competition but also so many positives to take away from it. My performance in the sprint is by far my best result to date! It has given me so much more confidence now I know where I stand internationally and the great news is I still have another year in that age group. I would like to thank the Jack Bloor Fund for their continuing support, which has allowed me to make the most of these opportunities and put my hard work from training to test.