Thank you for the £100 to help towards Ben’s cyclocross racing costs. We used the money for his entry fees at the National Championships, held in January at Abergavenny.
Ben has had a good cross season which has just finished, with quite a few highlights he won numerous Yorkshire races including the Rapha Supercross  at Broughton Hall and Ripley Castle on New Years Day. He also rode four races in Belgium where the sport is huge and was top ten in all the races, and had podiums in several of National Series races, where he finished in 4th overall (sadly a crash in the last event dropped him a place). He is 3rd overall in the British Cycling rankings.
Many thanks again,
Regards Mark (Dad) and Ben 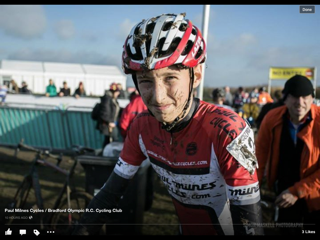