Unfortunately after my 6 th place finish at the world mountain running championships in Krynica-Zdorj Poland, my preparation and training for the vertical kilometre in Switzerland didn’t go quite to plan! After starting university, I first came down with the dreaded “Freshers Flu” Even though I was probably just about the only fresher that didn’t go out and drink myself stupid, as I was trying to train for the home internationals on the 21 st of September.

Unfortunately after clearing the freshers flu, I came down with Gastroenteritis, which hospitalized me and stopped me for competing for England. After 3 weeks of very little movement, never mind training, it’s fair to say I wasn’t going to Switzerland in the shape I was hoping to be in! However I had already booked the hostel and flights and didn’t really want to pass up the opportunity to add to the fast growing list of countries which running has taken me to.

On arrival In Switzerland, I and my friend Joe were absolutely amazed at the fact trains actually ran on time! We were also pretty shocked at the price of food, which even know we had been told was expensive neither of us anticipated a McDonalds “happy meal” to be around £11! (Good job we are athletes and don’t eat McDonalds) 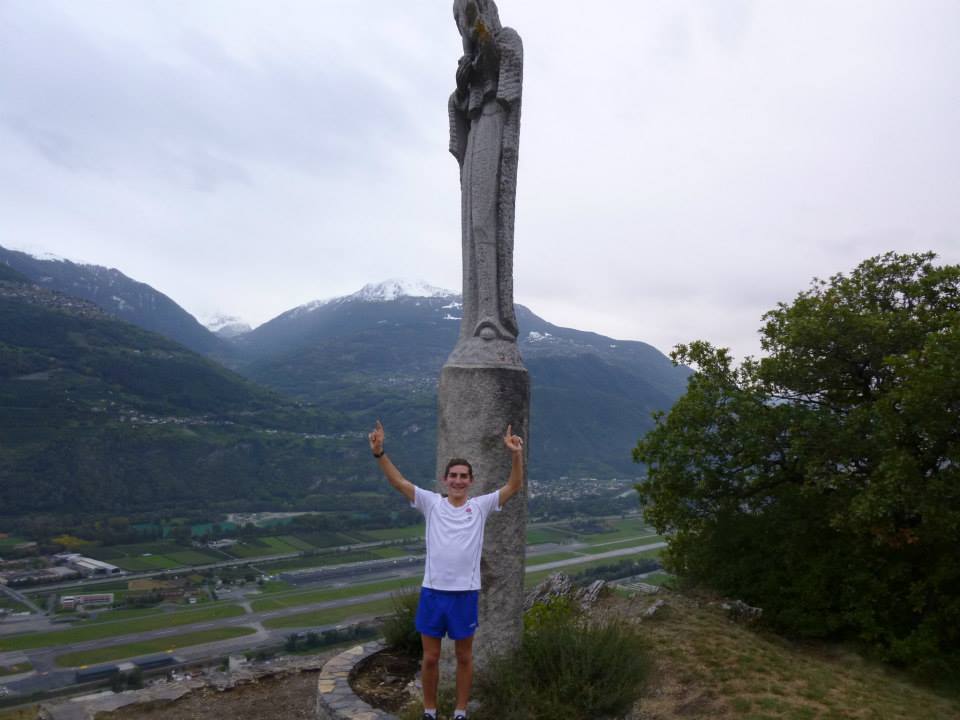 After a lovely scenic train journey from Geneva to Sion, we arrived at the hostel. After a quick nap we laced up our shoes for a quick evening run. However as we ran up through the vineyards of Mont-d’Orge, the scenery was so beautiful that the concept of time became none existent to us. As we descended the steps of the Chậteau de Terbillon we realised we had been out for over 2 hours!

The next day, we got up early, had our breakfast and set off again, this time with the intention of staying out for a fair while. We climbed and climbed up the mountain directly behind our hostel, we weaved our way up through stunning villages, ski resort chalets, orchards and farmland were the cows cheered us up the climb by the ringing of the big bells around their necks. We finally 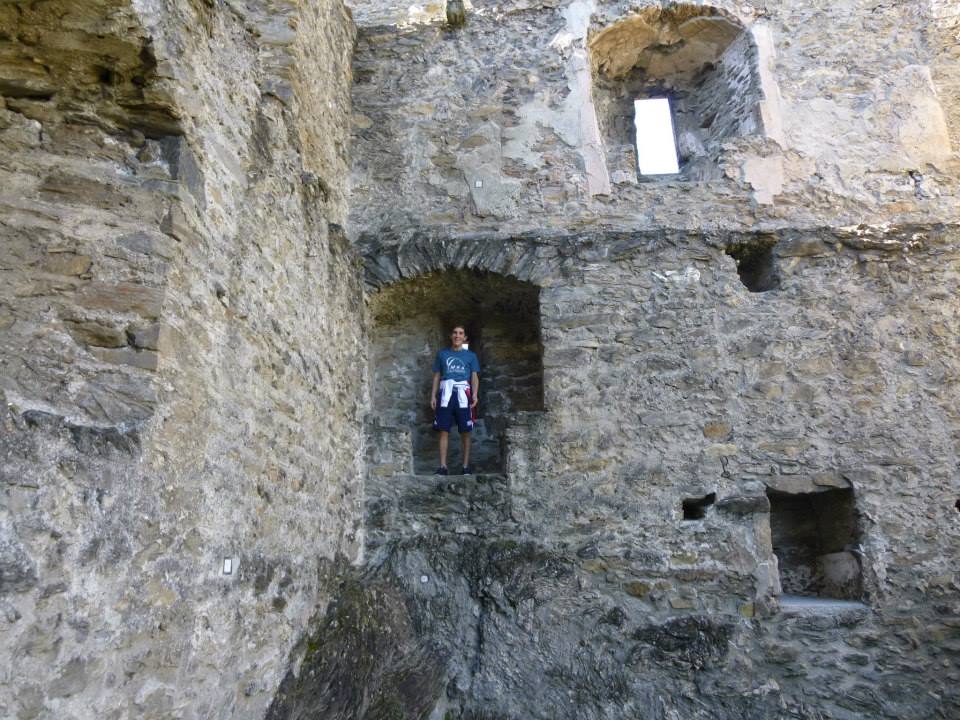 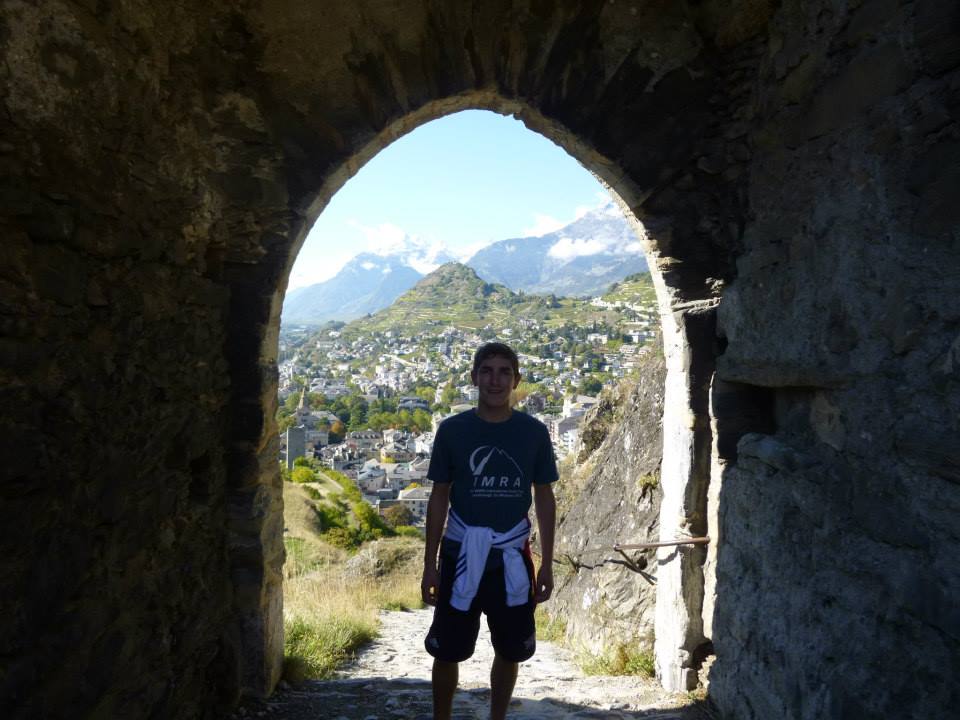 reached a point where the gondola ended and we would have struggled to go any further in the snow with the little gear we had. We descended back through the orchards and back to the town of Sion, where we treat ourselves to an Ice cream from a parlour in the town. (I got an amazing combo of pistachio and caramel) 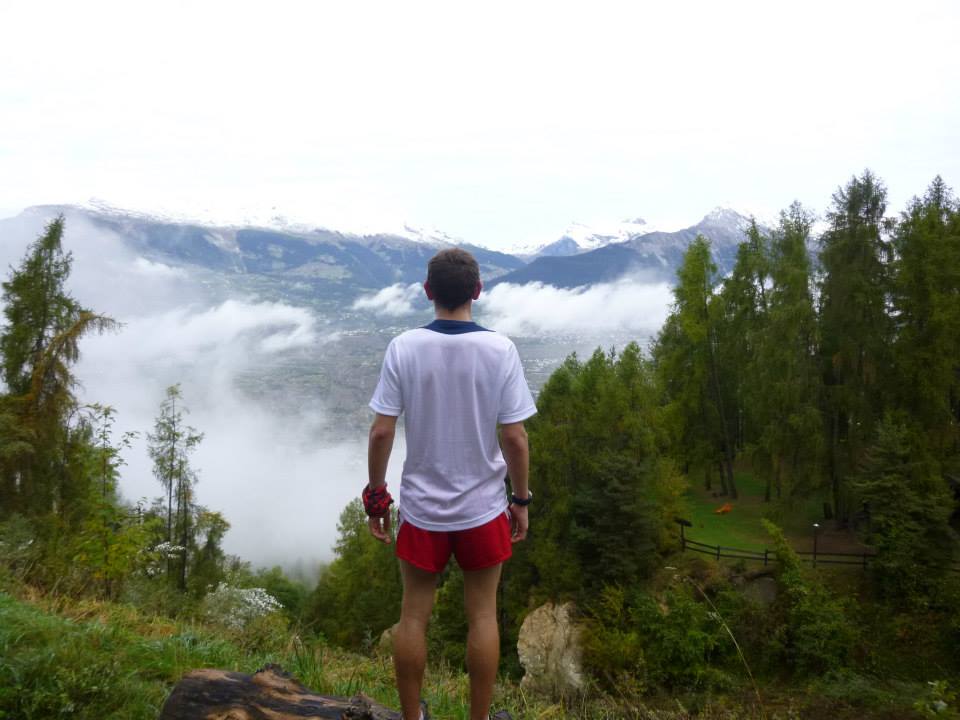 The day after our 5 and a half hour mountain run, we went for a pleasant walk through the vineyards on the other side of Sion from where Mont-d’Ogre was. We found a map at 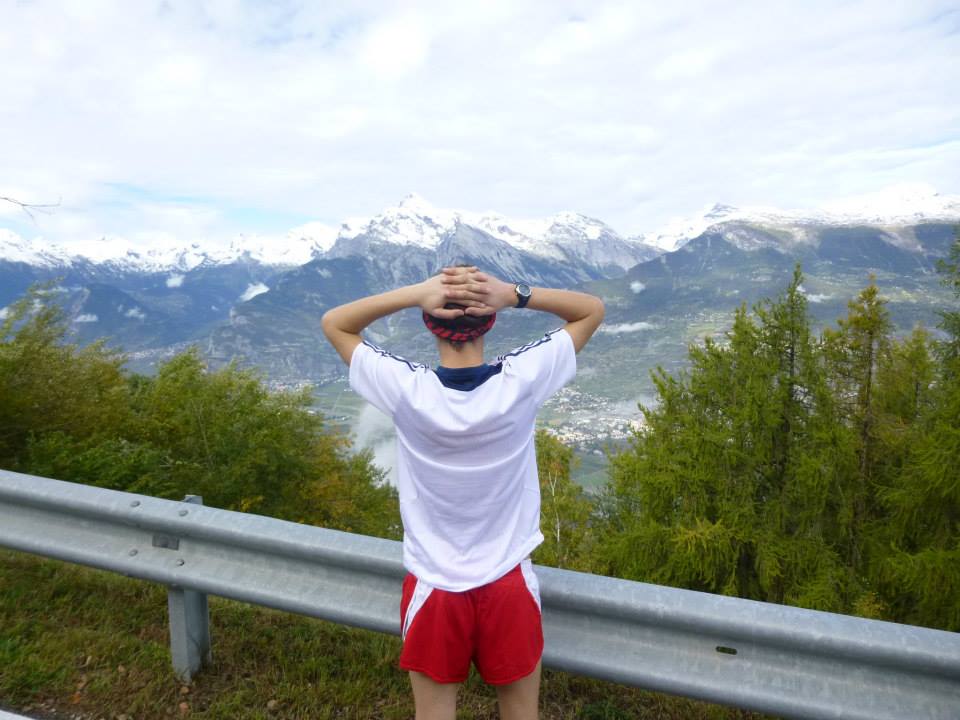 a café that showed the surrounding mountains names and there heights which showed the one we had climbed (the name escapes me) was around 3500ft to the summit! After climbing through the vineyards to the top, our plan was to go get another ice cream down in Sion, but when we arrived; we found that there was a giant Friday market. All 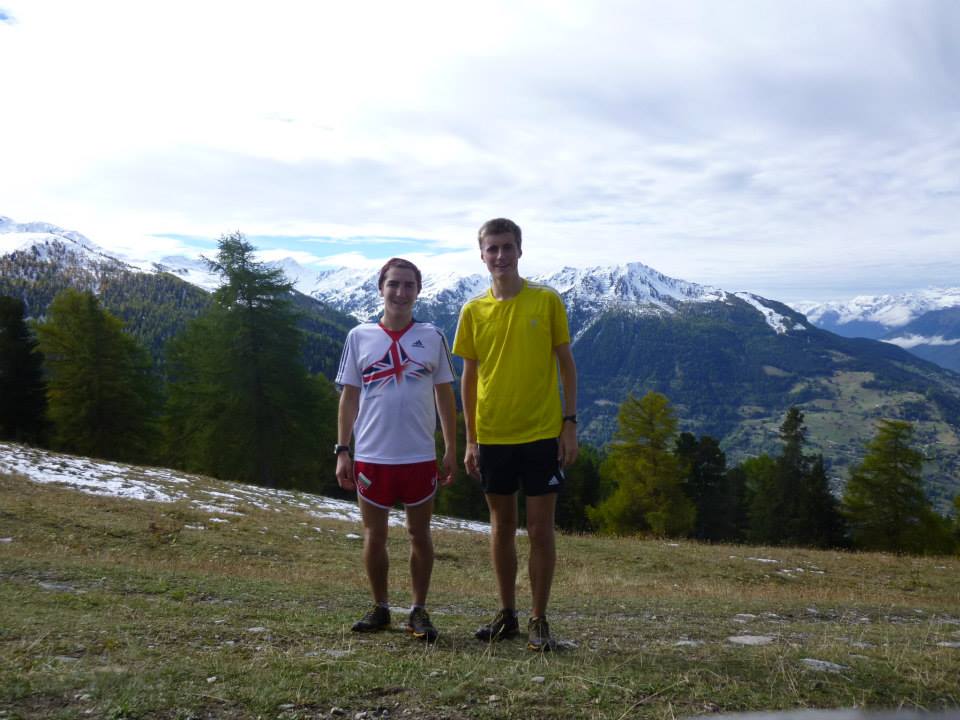 different kinds of Olives, fruits, nuts, cheeses and meats were on display, so instead of ice cream, we filled ourselves on all of the free tasters from the stalls and got a burrito from one of the stands. 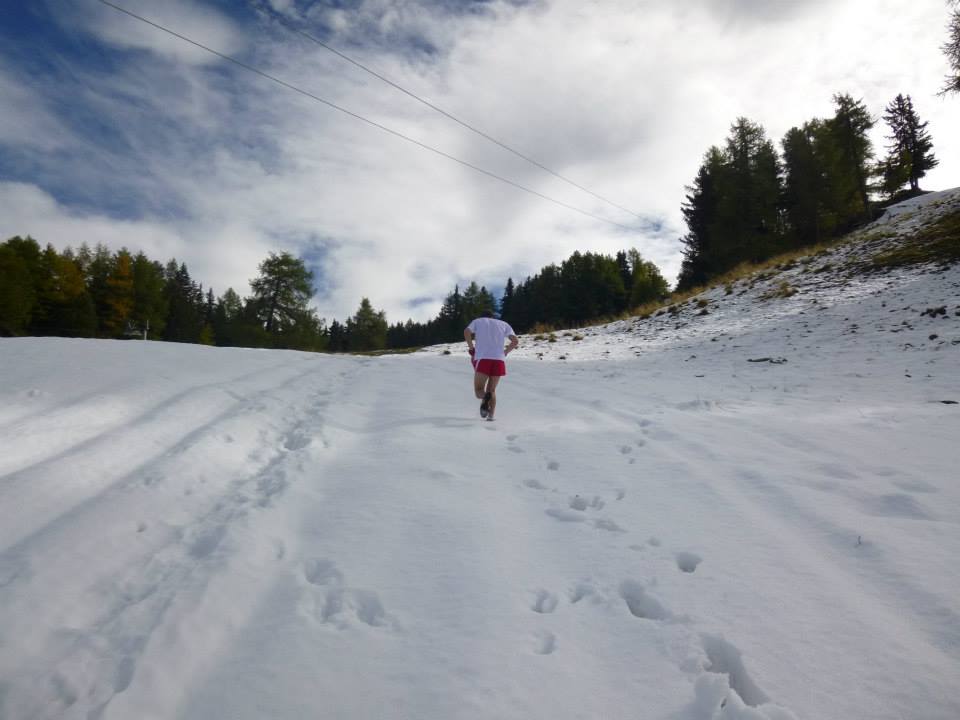 Saturday morning we got up early to get the train from Sion to La Fully for the vertical Kilometre. Although we had seen pictures and video footage of the course, we were gob smacked when we saw the course of 1.9km in length with 1km of vertical accent rise up above us.

After the very little training and 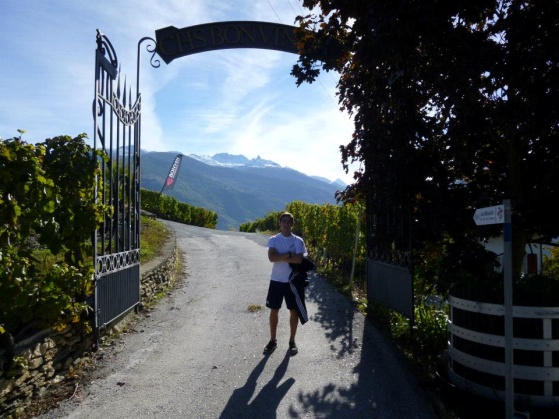 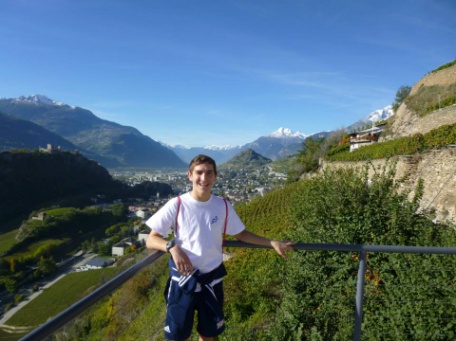 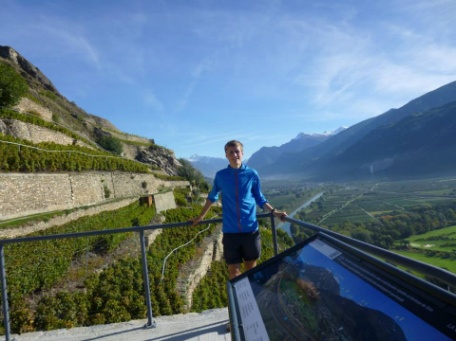 preparation I had had, I wasn’t expecting wonders, however did feel quite good on my warm up and hoped to produce a solid performance. Unfortunately after around 100m of vertical ascent into the race, my foot slipped off the old track that went up the course and I felt a pull in my calf. I continued fairly strong for the next 50m, but then the calf began throbbing getting worse every step. I have never pulled out of a race and would like to keep it that way! So I pushed through the pain and hobbled home. 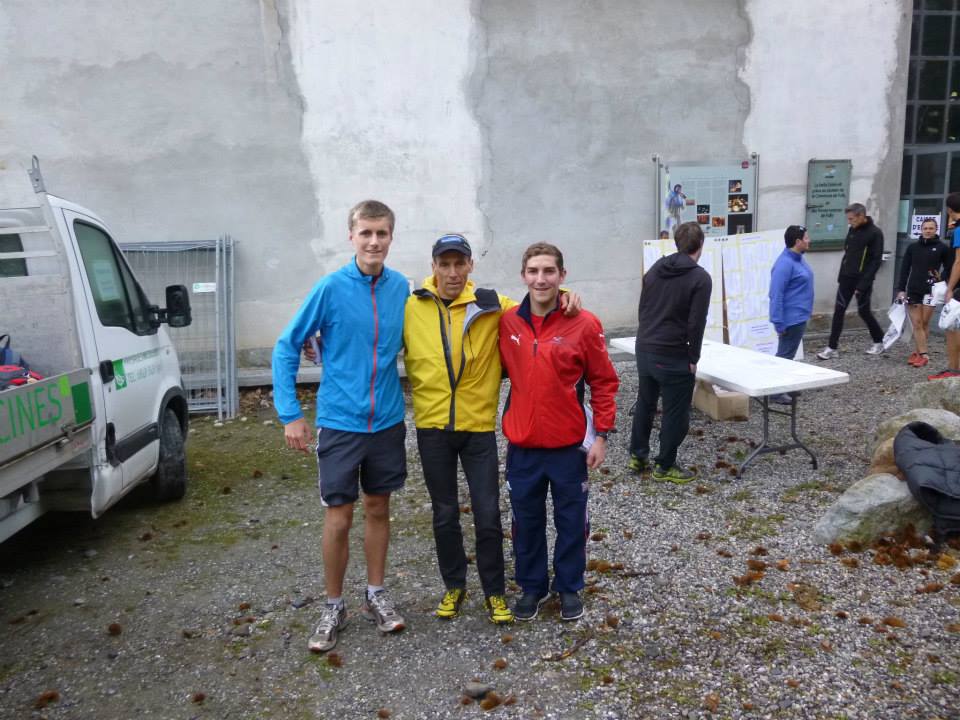 After the race I had to limp all the way back down the mountain, which took nearly 2 hours! At the presentation after, there were as much roast chestnuts and Swiss cheese as you could eat! I had never had roast chestnuts before, but thought they were absolutely delicious! And have since had them at home of several occasions. I and Joe also managed to get a picture with Urban Zemmer who won the race and is the world record holder for the vertical Kilometre.

Although the race had gone worst than expected, I absolutely loved the trip to Switzerland! It gave me a taste of competing out in Europe In a different kind of race to one I’ve ever done before and of course roast chestnuts! Hopefully I will be able to compete in many more races in some of the most beautiful places the world has to offer and when I’m fit, I will hopefully show what I am Capable of!

Thank-you very much to the Jack Bloor fund for the money I received towards the trip! I am very grateful and could not have done it without the support!