After a qualifying event in November 2012 I was selected to run in the world schools orienteering championships along with 4 other girls my age, in a squad of 40 from England.
There were 21 countries from all around the world, including New Zealand, China and Mozambique: with a total of 533 participants.
Like the Olympics, there was an opening and closing ceremony which both had amazing atmospheres, with lots of dancing, singing and gymnastics. All the teams paraded through the streets of Castro Marim, to the sports stadium, dressed in their country’s team colours – an amazing sight.
There were two competitive events, with training and friendship events as well.
On the Tuesday there was a model event (training) which gave us an idea of what the terrain would be like and also let us get used to running in the heat-25 degrees plus.
Wednesday was the day of the middle distance event (2.5k with 30m climb). It was held on the sand dunes close to the hotel, so it was really tiring to run on. I made one big navigational error which cost me 7.20 minutes and therefore I came 22nd out of 51, in a time of 26.52 minutes – 7.44 minutes behind the winner. Even though it wasn’t a great race it was still very enjoyable as the finish was on the beach.
After a rest day – spent sightseeing – there was the long distance race (4.3k with 260m climb.)The terrain this time was open hillside covered with gorse bushes, so it was very tough (and painful) to run through. I had a really good race, with no major mistakes so I was hoping that I would do well. When I finished my run I was very pleased to see that I was 5th, but nervous that I might move down the order when more people finished. However, once everyone had completed the course, I was extremely happy to see that I had stayed in 5th and therefore I had managed a podium place, receiving a certificate and sunflower posy.
My individual running times contributed towards our team result: our team came 4th   with a total time of 4hrs 56seconds, just missing the podium by 52 seconds over the two days!
The final race was the friendship relay, held around the town of Castro Marim. All 500+ participants were randomly put into teams of 3: My team mates were from Portugal and Belgium – Flanders. The challenge was to agree who would run to each of the orienteering controls, whilst all meeting up at three set controls. Fortunately my team all spoke good enough English to get by, but trying to meet up at the set controls with 500 other people, all shouting their own team mates names, was chaotic but great fun.
The week was absolutely amazing which I will definitely remember for the rest of my life. 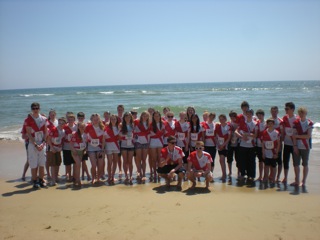 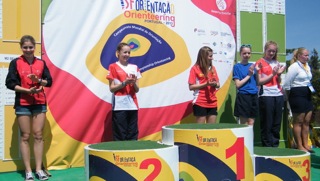 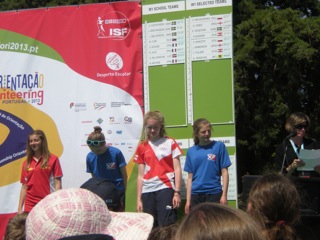 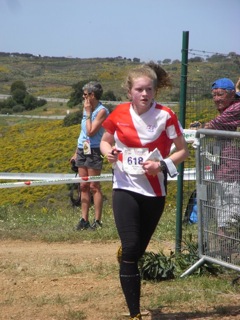