ISF WORLD SCHOOLS ORIENTEERING CHAMPIONSHIPS
ITALY-PRIMIERO
2011
This year I was selected to represent English schools at the world schools champs in Italy.  I had one of the best weeks of my life…
We arrived in Primiero the event centre on Saturday night. Primiero is a beautiful mountain village in the foothills of the Dolomites. All of the races were in local areas within 15 minutes drive of our hotel, The hotel Tre Ponti. From our room we had spectacular views of the famous three peaks that over look the village. 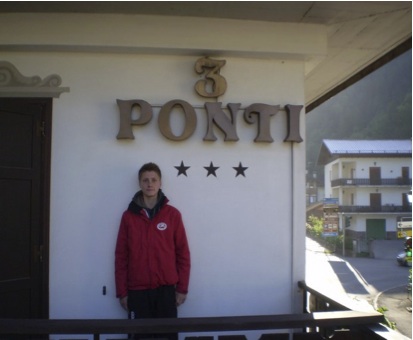 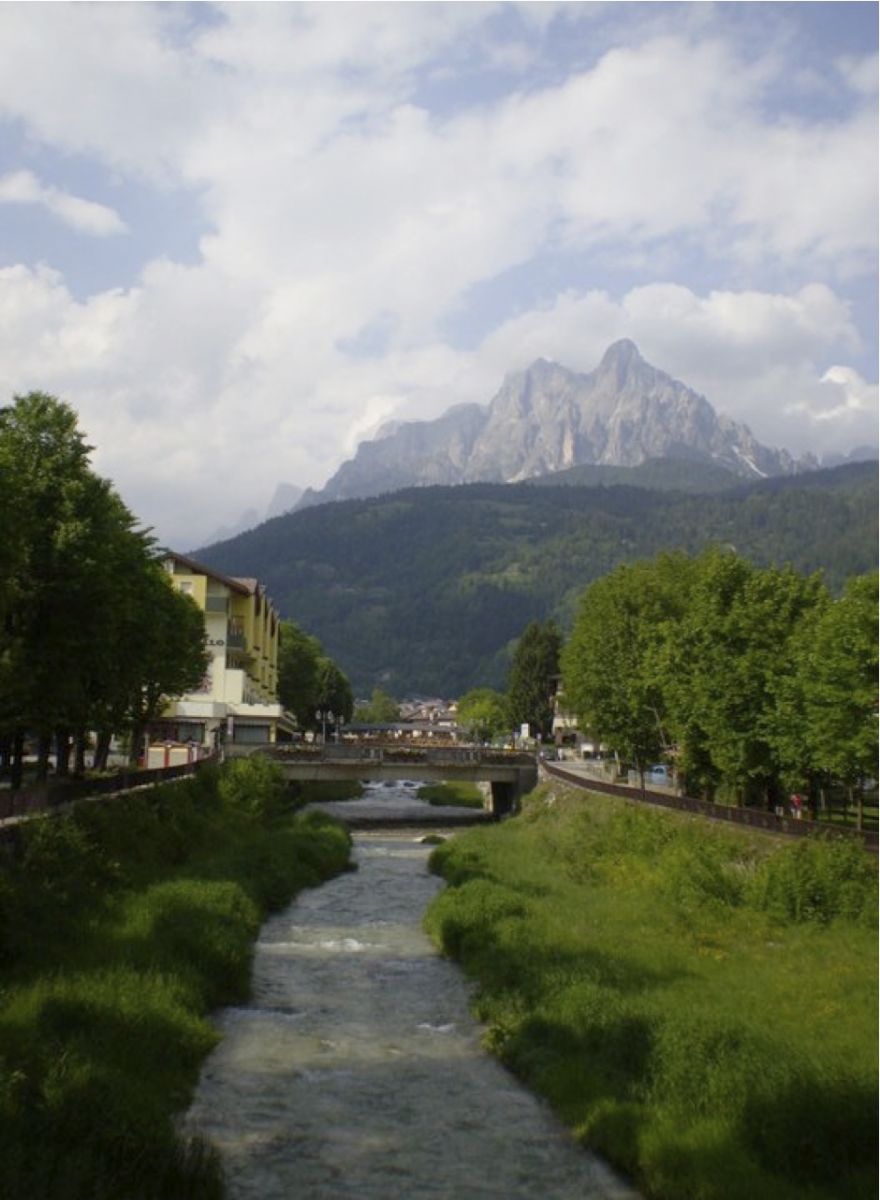 SUNDAY – On sunday we had the chance to train in an area that was similiar to the areas we would be competing in. I trained with the other selected English boys and Josh Jenner our coach for the week. We ran through a few controls then checked out any features we were unsure of. We had the afternoon off and played football with some local boys which was great. In the evening we watched the opening ceremony  and met some people from foreign countries for the first time.
MONDAY – Monday was the day of the Long distance race. Val Canali – Cistri     11th place
I had a great race all except for one control. All my times were faster than Hamish Rogers (another English select boy) up until my mistake and he finished 2nd… My mistake came on the 2nd long leg number 7. All the other controls I planned and executed well. Number 5 was also a long leg and I had one of the fastest times. I didn’t spot number 7 as potentially difficult leg (not looking ahead) and just ran at it… I came out on a parallel path and lost 10 minutes looking for the control then relocating. I was annoyed and didn’t attack the last controls. Finished 11th place and considering my mistake it wasn’t too bad. I knew that if I cut the mistakes I could get in the top five on the middle distance. 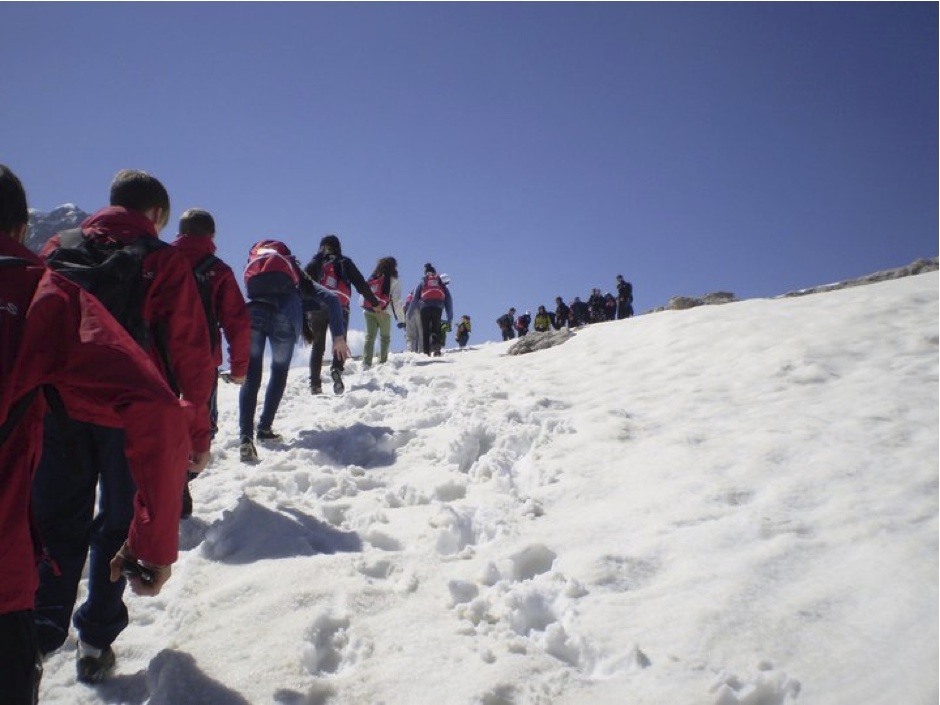 TUESDAY – On Tuesday we had a rest and cultural day. We took two cable cars from San Martino Di Castrozza , which took us too a high plateau just a hundred meters or so below the snow covered summit of the Rosetta, a 2700 meter peak. We climbed the short distance to the top along with some of the other national teams. The views were spectacular, we could see the Dolomites stretching for miles into the distance and look down into the valley far below and see San martino along with the area for the friendship relays. The Israel and chinese teams had never seen snow before!!  In the afternoon after a pasta meal in one of the lower cable car stations we descended to the Paneveggio Nature park where we had a guided woodland walk and the chance to see red deer. 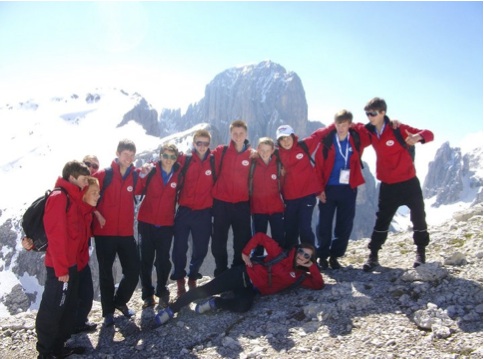 WEDNESDAY – Middle Distance Race Val Canali – Piereni         4th place!!
I wanted to do well and knew I could after the long race; I just needed to get my navigation spot on. I made one big-ish mistake about one minute to number 3; I was really cautious then, too low on the control. After that I made a few little mistakes but nothing major. Towards the end of the course I pushed hard but stayed in control of the navigation. I was pleased with how the course went and with the result. 4th place; 5 seconds off 3rd, and 28 seconds off 1st! Well done to Harry Butt another England boy who finished about 30 seconds behind me and came 5th. That evening each country had to create a cultural store for everyone to look around and experience foods and things particular to each nation. 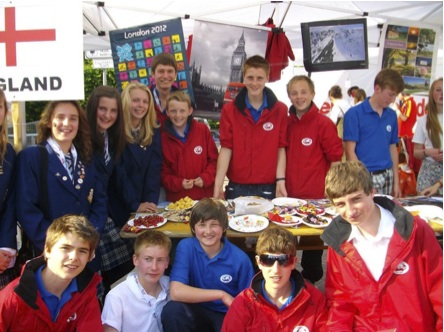 England cultural stall with the girls from New Zealand 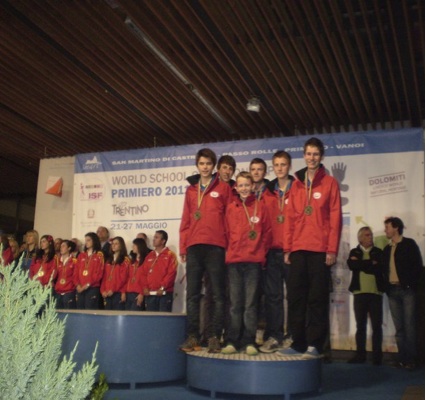 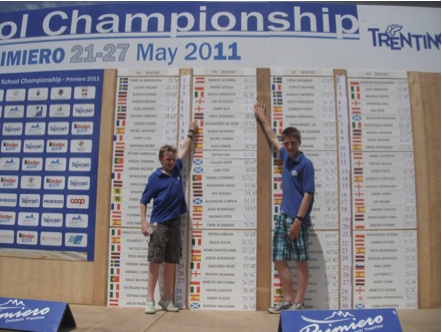 4th and 5th podium. 4th and 5th on the leader board.
THURSDAY – Friendship Relay.
The Friendship relay was a great way to finish the week on a high. The previous evening we had been paired with two people from different countries to create a mixed ability team. Between the team you had to collect 40 controls, 8 of which everyone had to punch together. This meant sharing out the controls so you all would meet up at the same time at each compulsory control. I was paired with a Latvian girl (who spoke no English or French) and a French girl. It was great to practice my French and learn some Latvian! The last four controls we had to complete together, it was wonderful running through the streets lined with fans then holding hands and racing down the finish. We came 49th out of 160 teams which wasn’t bad but for me it was all about mixing with people from across the world. That evening the English select boys and I were on the podium for coming 3rd after the middle and long distance race times were added up. In the end everyone in the England team went home with a medal. After that there was a closing ceremony and a party which lasted till gone midnight.
I had an amazing time and would like to thank josh Jenner for being our coach for the week and the Head coaches Peter Christopher and Pauline Olivant for all their hard work. 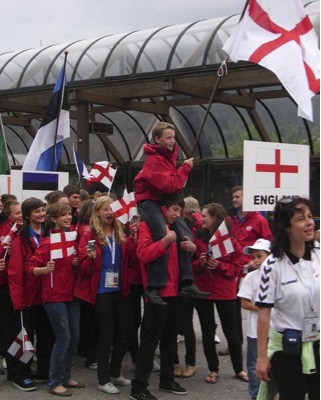 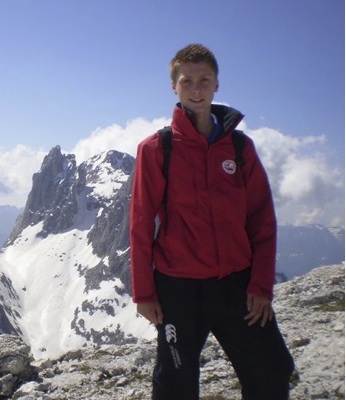 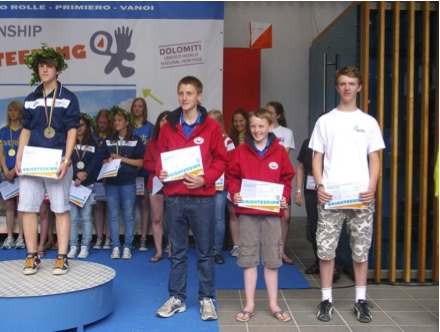