At the end of April, 12 Juniors from SYO jetted off to Estonia to compete as part of the 40-strong England Team at the World Schools Orienteering Championships 2019. The week-long event was based at the Tehvandi Sports Centre close to Otepää in the South-East of the country, with the arena for all days at the Athletics Stadium – complete with run-in along the track! The forests we were running in were adjacent to the sports centre, and all the races had a few final controls amongst the ski slopes and jumps.

Live TV coverage and results were available for all of the races, so supporters could watch back home as we competed. There was even coverage of the Opening Ceremony, complete with a drone to catch the action from overhead. Check out this aftermovie to see some of the highlights from the week!

Below are reports by the Select SYO runners (7 SYO members were individuals in Select teams, whilst 5 boys made up the High Storrs Schools Team)…

Model Event – Tuesday 30th April (Dom D)
Before travelling to Estonia, all the team were able to look at maps online (map-geeking), but it was difficult to judge what the areas for the races would be like, with the biggest unknown being the vegetation, and how it was mapped. The day before the official races began, we had the opportunity to check out the terrain in a specially organised Model Event. As well as a chance to run on very similar terrain, we could also see how things such as the start and finish would be set up. We went round the ‘score’ style course both in groups and individually, allowing us to meet up with our coaches to discuss what we found along the way, which helped us to develop our plans for the Long and Middle. We quickly realised the importance of avoiding even “light green” forest due to its density, and this was the main point we took away to bear in mind for the following days. There was a real mix of vegetation with coniferous and deciduous forest – some incredibly runnable, and other parts, such as the marshes, less so! For some members of the team these were the first controls they’d ever found abroad, and it was to be the start of what was a great week of orienteering and memory-making!

Opening Ceremony – Tuesday 30th April (Alex E)
After the model event it was time for us to relax and enjoy the opening ceremony in the sunshine that we would soon start to miss over the following days. The event began with the procession of flags from each nation, followed by a series of traditional Estonian dances representing unity and friendship. We then had some brief speeches from the Presidents of Estonian school sports and IOF, and the deputy president of ISF, as well as the oaths of fair play for the athletes and coaches. Last but not least was the ceremonial lighting of the flame: an Estonian athlete strode along with the torch – followed by an entourage of dancers – to officially begin the competition.

Long Race – Wednesday 1st May (Alex C)
After months of excitement, preparation and waiting, I was finally at the start line of the long distance race – my first run at the World Schools Championships 2019. After the previous day’s training on similar areas, I had already got a feel for the terrain and the map although, as prepared as I was, I was very nervous. The course started straight up a huge hill, which was both a technical and physical challenge but I navigated well and managed to keep running (pretty much) all the way to the top. The rest of the course went pretty smoothly and I made few mistakes, the terrain wasn’t very runnable but I really enjoyed my course. Running into the arena was an amazing experience and nothing like anything I’d ever done before, with live coverage of the whole event and an amazing atmosphere. 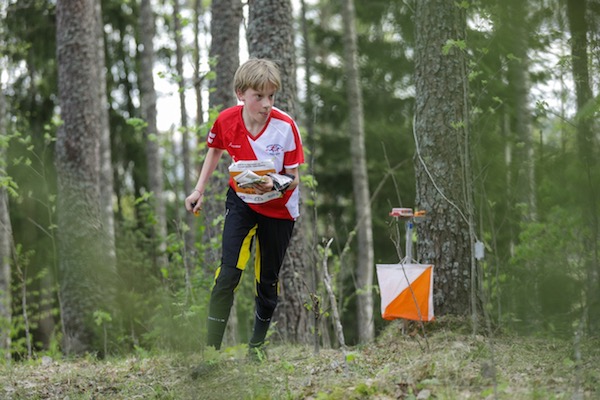 Cultural Day – Thursday 2nd May (Imogen P)
The cultural day was extremely exciting, it first involved a trip to the Tartu Science Museum which was amazing. We spent 4 hours in the museum going on the various interactive attractions including a spinning tunnel, various water exhibitions (which involved us getting quite wet!) and riding on a bike suspended in the air. After this it was time for a very wet but fun orienteering quiz course around the city of Tartu where we were sent out in groups of 10 to find various checkpoints around the town and answer a question at each one. Eventually this led us to the University which was where the cultural day celebrations took place later that day. The cultural evening certainly exceeded our expectations with every country performing their own national dance or song. My personal favourite was the Austrians at the start because we all ran down to join in at the end. England performed Morris dancing which was very hard and took me a while to learn but was definitely worth it and we got to dress up in costumes with England hats and tattoos. In addition every country provided a stall with different foods or items from their country. (The New Zealand sweets were really good!) All in all it was a very good day and I had a great time!

Middle Race – Friday 3rd May (Max M)
On Friday, the Middle Distance took place. Unfortunately, the weather changed dramatically from 21 degrees on the Long to 2 degrees and snow for the Middle. Luckily the quarantine was indoors. The wood was filled with small paths crisscrossing between small hills. It was really enjoyable but needed concentration. I had a great run coming in 1st after around half the competitors! After a nice risotto for lunch, I just had to wait to see how I had done. Amazingly I came 6th – which is on the podium. England also had 3 more podiums with Euan winning M2 School, Jim taking 5th on M1 Select and Flurry taking a 2nd on M1 select. Overall it was a great day for the English team! And as we were all tired, the rest of the day was spent relaxing. 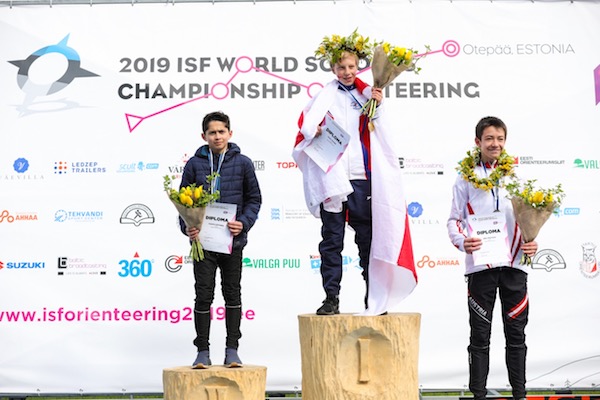 Friendship Relay – Saturday 4th May (Sam C)
On Friendship Relay day we, as normal got up and got breakfast, then went to the event arena. England arrived early and we watched the rest of the teams slowly arrive. The teams of three, each from a different country begin to assemble. At 11 the maps were given out and despite language barriers teams had to decide the route they would take each. I had an Estonian and a Russian on my team and it was hard to sort out who was going where but after a while we managed. Next was the start. There was a giant pen and after 15 minutes the tape was dropped and everyone started running. Once everyone started and got all the close controls teams had to meet up at point A which was on a large hill. The same happened from point A to B and B to C. On the run-in everyone had to hold hands and afterwards there was the traditional swapping of kit as there are no more races. I managed to get the highly prized New Zealand top, a Polish top and a Spanish top too. It was a great day I will always remember.

Closing Ceremony – Saturday 4th May (Dom D)
Sadly, all good things come to an end, and so following the inter-country top swapping we headed back to our accommodation to get ready for the closing ceremony… and farewell party! The other members of my team had put in some fantastic runs in the Long and Middle Races, placing our M1 Select team 1st overall. The overall prizegiving was incorporated into the closing ceremony, along with the expected speeches, and a slightly less traditional performance by a dance troop, including one where the dancers portrayed a snooker game! Alas, it was the end of World Schools 2019 – but there was just time for the Farewell Party – complete with a live Estonian singer and band, who performed a mix of originals and covers (thankfully!) 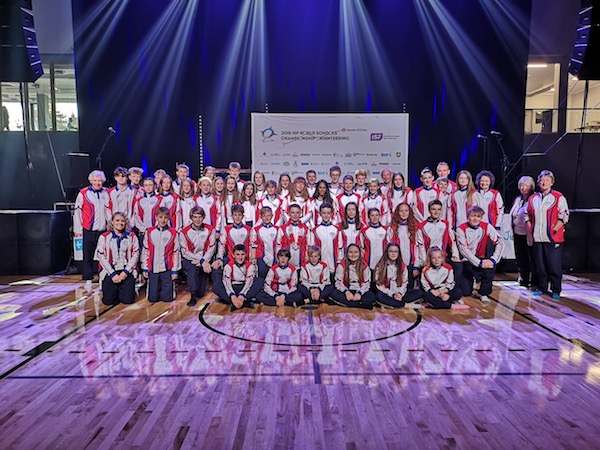 A huge amount effort was put into the World Schools Orienteering Championships 2019 – complete with Opening and Closing Ceremonies, and live results and streaming to those back home – and so we’d like to thank the organisers for putting on such a great event, and our England team managers for making it all happen.

Equally our thanks go to the Jack Bloor Fund, Yorkshire and Humberside Orienteering Association, and SYO for their financial support.

Overall a fantastic experience, making memories that will last a lifetime!