This is a new trophy in recognition of the extended family of Jack and Pat Bloor.

Presented by the children, Hilary, Vivien, Robert and Roger and the grandchildren, Alistair, William, Max, Mitchell, Ella and Lucia

From 2019 the Bloor Family Trophy will be awarded to the first man Over 40 in the Jack Bloor Senior Race.

This trophy is inspired by the prehistoric carving n the Tree of Life Rock. This same rock carving used was used for the 2007 small trophy. Small trophies are awarded to each class leader to keep. The actual rock can be found at grid reference SE 180 512 and further details at stone circles website

All the children chose this carving to represent the family.

Thanks to Stoneface Creative for producing this grand trophy. More of their work can be seen at the stoneface creative website 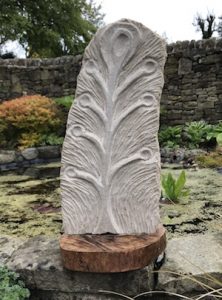