This year I was selected to go on the Lagganlia JROS (Junior Regional Orienteering Squads) tour. This is a week long orienteering training camp near Aviemore, Scotland, for MW14s (and some MW16s) who have achieved a championship time at one of the selection races. As I haven’t been orienteering for as long as most of the other people in my age category, I was extremely happy to be able to have this opportunity.

Everyone arrived on the Saturday – most people by train but a few came by plane or car. Once we were all settled into our dorms and had had some food, we did some exercises to try to get to know people’s names. We went round in a circle saying our names and our (imaginary) occupations that started with the same letter as our name e.g. Tony the truck driver. The difficulty was that you also had to remember all of the names of the people before you; I only had to remember four, whereas the last person had to remember all 26. This led to some very creative jobs, as quite a lot of names began with the letter “A”. Astronaut, angel and anthropologist were some of them (there were three “Alex”s as well — which got a bit confusing at times).

We started off the week by going on a short minibus journey to the Moor of Alvie and Speybank, where we practiced pacing by looking at how many double paces we took over 100m on track and terrain. Next, we split into our coaching groups (I was with Rebecca, Hannah, Ellis and Alex W) and did a couple of short loops based on bearings and aiming off-using our pacing from earlier on to make sure we were going the correct distances to each control.

After this, we did a clock relay in teams of three and I was with Joe and Scarlett. We had a 10 second time penalty because Joe ran off for the handover slightly too early, but we managed to win nevertheless.

After some lunch back at Lagganlia, we spent the afternoon at the chequerboard at Insriach. This was a very complex area made up from a grid of rides and varying shades of green vegetation. It was very different from the morning and it took me a while to get used to the map. Because it was a grid, it was very difficult to relocate on and we had to focus to make sure we didn’t get distracted by others.

After dinner we had some more exercises to get to know names with Brenda Bear, Brian Bear and Backwards Bunny. It had been a really enjoyable day and everyone was getting along well.

On Monday morning we headed off to Loch Vaa to practice simplification — making the legs easier by only using the obvious features on the map. We divided up into our coaching groups and started off by doing a map walk. The area was very vague in some places which made navigation more difficult as the features were less noticeable. We then did some short loops and practiced relocation.

In the afternoon we visited North Granish to practice more simplification, and ran a course using our sketch maps that we had drawn the night before, which worked better than I expected. We then did a practice course using a normal map, meaning that we had to filter out all of the extra detail that we didn’t actually need, before finishing off the day with a head-to-head race against someone else.

Today we went to Culbin and were joined by some of the juniors from Moravian orienteers. In the morning we practiced the skills from earlier on in the week and did some talk-o (in pairs, one person has the map and has to tell the other how to find the control). In the afternoon we did a course entirely in the light green area of the map so we could practice in an area with low visibility. We finished the day with an odds-and-evens relay.

This was the “rest” day. We had two sprint races, a qualifier and a final. The qualifier was at Badaguish and had a really zoomed-in scale (1:1500) which took a while to get used to. There was a silent start and quarantine to add more pressure and the course had butterfly loops and lots of crossing lines to add confusion, but I just managed to qualify for the A final — only one second ahead of the leader in the B final. We then had a go on the rings where I was so close to getting across the river and made it to the last ring before falling in.

We then went to Glenmore Lodge for the sprint final. I didn’t do as well in this race as the tiredness of the week so far caught up with me and my running was slower than I would have hoped. I also made a few small mistakes that didn’t lose lots of time, but because it was a sprint it meant that any time lost was magnified much more.

After the races we went swimming in a loch and it was freezing! Once everyone had warmed up a bit, we went for a bit of shopping in Aviemore before spending the rest of the day back at Lagganlia.

Today we went to Roseisle and started off the day with two 1km time trials on track and terrain. This was in order to help us with route choices and deciding whether to go straight to a control or around on a path. After the terrain run I was so tired! We then did some short loops based on map memory, meaning that we had to focus on simplifying the legs so that we would be able to remember where we were going without looking at the map. In the afternoon, we did a peg relay before heading down to the beach for some fun.

This was the day of the Lagganlia Classic Race, where we went to Insriach for a final chance to put the week’s training into practice. We all knew that it was going to be a very technical area and relocation would be difficult, so we shouldn’t necessarily run fast if it was going to compromise our navigation. Most of the course went well for me, however I made two big mistakes which cost me a lot of time — on one my bearing was ever so slightly off and I didn’t notice when I went straight past the control, but on the other I followed a ride that wasn’t on the map but went parallel to the one I wanted. I spent too long confusedly walking around before I found an obvious feature that I could use to relocate.

We then went back to Lagganlia for the final activity of the week — the balloon relay. The junior coaches had some very ‘distinctive’ clothing choices. My team won (me, Jim and Anna) and thankfully none of us popped the balloon when we ran, because if you did you had to stop and inflate another one before the next leg runner could set off!

The week ended with an award ceremony for the sprint and classic races, but also for everyone else. Some examples of awards were for the first trip to the medical centre and the person who ate lots and lots of toast.

This week has been a great experience for me as I have learnt lots of new skills and made lots of new friends, without getting completely swamped by midges! It has been very memorable but also very tiring (over the week I ran about 56km) and I would definitely recommend it to anyone who has the chance to go. I would like to thank all of the coaches and organisers of the tour, as well as the cooks for all the wonderful food — we wouldn’t have survived without you! Also thank you to the Jack Bloor Fund for helping me with funds for the tour. 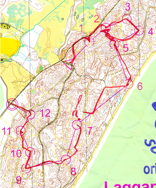