Junior World Orienteering Champs                Florence Haines
On the 6th of July I flew out to Slovakia with the rest of the Great Britain team for a week in Košice. After a hot sleep we went to the long model training. I found this really useful because the terrain was so different to anything in the UK and my only experience was in Slovenia last summer. It was also good to see what it was like trying to run in the intense heat, around 35 degrees!! Thankfully it cooled down throughout the week and we even had some rain! 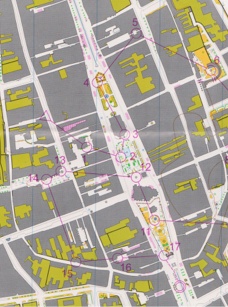 Sunday was the first race – the sprint! Having not run on hard surfaces for months due to injury I was worried the sprint may bring back knee pain but there was no pain, a good start! Warming up it was very hot! Unfortunately there was not GPS tracking which I had been looking forward to using. However there were electronic timed start and finish gated which gave some entertaining dives over the finish line! My run was technically near perfect but as you can see from the map extract, it wasn’t hard! Disappointing that a potentially good area ended up with such a runner’s course.  83rd.
Long distance on Monday. Was really looking to this race and lots of race prep with the rest of the team the night before left everyone feeling confident. A long run through at about -6 gave me a lot of time for my brain to start shouting ‘your about to start THE JWOC long!’ but I focused and was shortly on my way to no.1. It wasn’t long until I was climbing out of 2 and thinking ‘am I really walking in a JWOC race?!’ but yes I was! I was the same for everyone, it was a pretty steep hill. I had 2 big mistakes- the route choice leg to 4 where I didn’t pick the best route or execute my route well and 8 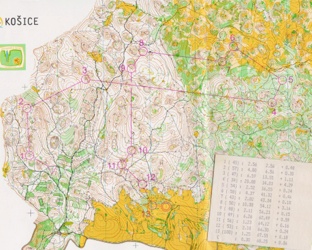 where I struggled to find a way from the open back into the wood and overcomplicated it. Together this was over 7 minutes lost. Nice to think with a good run I could have easily got on the podium but it’s never that easy!  21st. Huge well done to team mate Lucy Butt who came 7th, the best GB performance of the week.
We then had a deserved rest day, where a few of us went training for the Middle. Minus getting lost trying to find the start (we were off the map and the tapes ran out!) it went well, lovely open forest with intricate contour detail. We then joined everyone and went for a picnic by a lake with the supporters.
Next was the Middle Qualifier. Having never run a qualifying race before I was a bit nervous. I shouldn’t have been. The difference of this race from any other is that you start along side 2 other runners (in different heats). I made a mistake which I cant remember doing since I was very little! I lost over 5 minutes on no.1! I can’t give a specific reason why this happened, I don’t really know myself! This meant however hard I tried, my head was down. I did have a really smooth section from 2 through to 9 where I had two 3rd and two 5th  fastest splits. This didn’t last and I was losing time all over the place. I didn’t qualify and was very disappointed.  The whole day was an experience I don’t wish to repeat but one which I learnt a lot from. 29th.
Middle final. I was in the B final and found it hard to pick myself up from the previous day and find motivation. The area needed aggressive running and fast navigation which I lacked. My run was nothing amazing/nothing disastrous. 20th.
Final day of competition bought the relay. I was moved up from the 2nd team to the first team only a few days previous but knew my team mates well and knew we had the potential to do well. Lucy Butt gave us a good start coming in 18th, only 30 seconds off 6th! Before I knew it I was racing up and down the slopes, gaining places in rocky sections where other teams seemed to struggle. I made a few mistakes but kept my head through spectator and through the final loop. I will never forget what came next. The hardest, steepest, longest last 2 controls and run in I hope to ever experience! I pushed too early (thinking I felt better than my legs actually did!) and lost around 4 places on the run in and was extremely relieved when I could stop. 12th only 45seconds off 6th! Anchor leg was left to Charlotte Watson. She did an amazing job and went through the 2nd radio control in 6th! The uphill finished challenged everyone and although charlotte didn’t lose any positions, she didn’t gain any no matter how hard and Lucy I shouted! 10th only 28 seconds off 5th place and 9th country. This result proves that there is a lot of potential in this team and I really hope I can be part of it next year!
The evening was at the JWOC banquet with everyone where I met loads of new friends and had a really good time. I would like to thanks to the Jack Bloor Fund who helped me go to this fantastic competition. 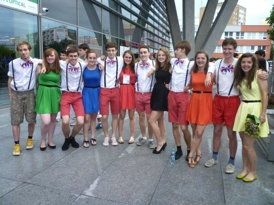