Recent downpours failed to slow the field of over 200 runners in an exciting 26th annual Jack Bloor Race on Ilkley Moor. In a dramatic finish the leading pair in the men’s race pressed the 5.2 mile course record hard – only to see it stay out of reach by 5 seconds! Graham Pearce of Pudsey & Bramley won in a time of 38 minutes 9 seconds with Ilkley Harrier Tom Adams hot on his heals and just 2 seconds behind. Next came the two Leeds City AC runners of Chris Birchall and Greg Hull. Greg won the veteran over-40 trophy and remains the current course record holder. Ilkley Harriers’ Ian Rowbotham retained his first place in the veteran over-50 class.

Not to be outdone by these seasoned fellrunners two youngsters featured in the top ten places. In a time of 40 minutes 35 seconds Fred Slemeck of Leeds University just squeezed ahead of Ilkley’s Alex Sinclair to take 6th place overall and win the Arthur Dolphin Under-23 trophy. Presented by Ken Peart on behalf of the Gritstone Club this recently introduced trophy commemorates Arthur Dolphin, climbing partner and friend of Jack’s. Members of their Gritstone Club have manned the Jack Bloor Race checkpoints for over 25 years.

In her first senior race, Florence Haines of Ilkley Harriers came 79th overall and won the women’s Under-23 category in an impressive time of 53 minutes 22 seconds. The ladies veteran trophies for over-40 and over-50 went to Carol Evans of Settle Harriers and Ilkley Harriers’ Val Kerr.

The Jack Bloor Race not only provides for challenging competition by hardened fellrunners but also attracts a large number of local runners some taking on the course for the first time. Thanks to generous sponsorship by the Ilkley Brewery Company every runner in the senior race was presented with a well-deserved bottle of locally brewed  Jack Bloor Ale. Presenting the beer, co-founder of the Ilkley Brewery Company, Stewart Ross, said, “This is the second year we’ve sponsored the Jack Bloor Race and we’re proud to be associated with such a challenging event that honours Jack’s memory”.

Class trophies were presented by Terry Lonergan of The Complete Runner whose longstanding support for the Jack Bloor Races and Memorial Fund is greatly appreciated. The Jack Bloor Fund supports young people engaging in outdoor pursuits.

Now in their 10th year the junior Jack Bloor Races saw a record entry of 121 runners. Children tackled courses of half a mile, one mile or 1.5 miles in one of five age-based classes (U16, U14, U12, U10 and U8). Some were out to beat their rivals or improve on a previous time. Others were simply there to enjoy the occasion with several experiencing their first fell race.

Some extremely close finishes saw Amelia Gibbons just pip Evie Graves over the line to win the U8 girls race whilst Freddie Ziegler took first place in the U8 boys race just ahead of Ilkley Harrier Ben Morley. Running the same half mile course the first U10 girl was Bethan Morley of Ilkley Harriers whilst Logan Hargraves-Madhas of Wharfedale Harriers retained his U10 boy’s title. In a field of 35 runners tackling the U12’s one mile course Ilkley Harrier Sarah Pickering was 1st girl, only 4 places and 42 seconds behind the winning boy, James Lund of Keighley & Craven. On the same course, Wharfedale Harrier Ellie Lambert came 4th overall and took the girl’s U14 title with Emile Cairess of Bingley Harriers winning the U14 boy’s race. Despite a smaller number of runners the 1.5 mile U16s race was no less hotly contested. James Hall came home in the lead and Helen Wood took the girl’s title for local orienteering club Airienteers.

Sponsored by Smoooth, the Café and Deli on Ilkley’s Wells Road, every junior runner received a voucher for a free smoothie as a reward for their efforts. The top three boys and girls in each category were also presented with certificates and ‘cookie medals’ by the team from Smoooth.

As in the senior race, class winners each received one of the Jack Bloor Race’s coveted small trophies. Inspired by the wealth of ancient rock art on Ilkley Moor, each year’s small trophy features a unique pattern. The 2011 trophy illustrates part of the Idol Stone.

As ever, thanks go to the many people who helped stage the 2011 races and particularly to Peter Haines who has organised the Jack Bloor Races for the last nine years.

After his win, Graham Pearce said, “This race is an absolute classic and is run in memory of a true Yorkshire hero who did a lot for the sport so I always try and do it. It’s also a great circuit of Ilkley Moor taking in a lot of the landmarks”. 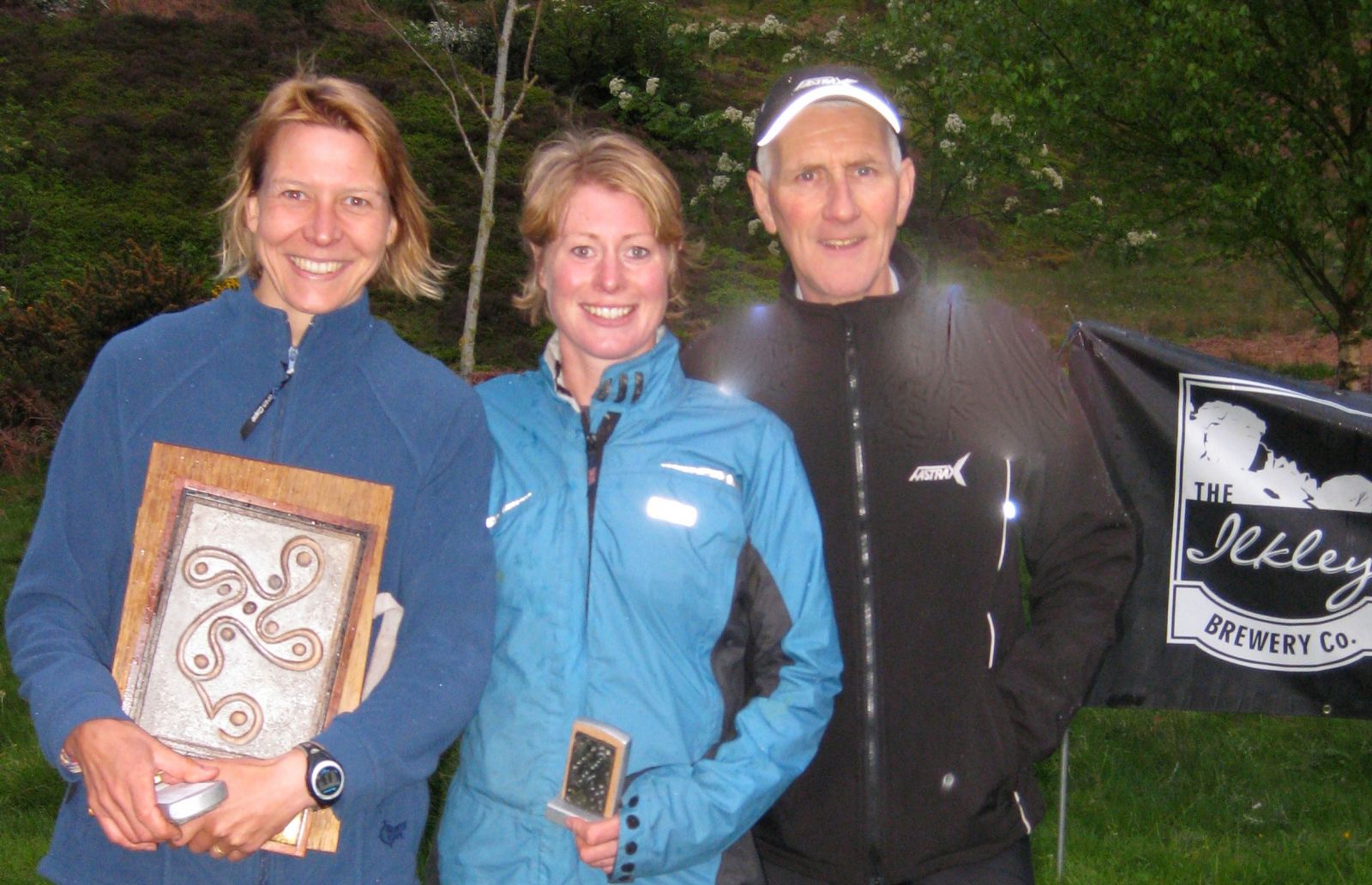 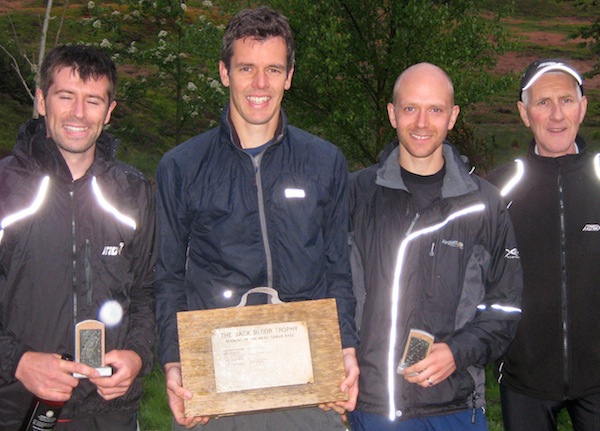 The Men’s winner Graham Pearce said this about his race:

This race is an absolute classic and is run in memory of a true Yorkshire hero who did a lot for the sport so I always try and do it. It’s also a great circuit of Ilkley Moor taking in a lot of the landmarks, so a great run out.

After the usual fast start to avoid the congestion around the old water pumping station I found myself languishing in about 20th place. I always seem to get caught napping on this race! But I managed to get into the lead up the drag to the Badgerstone, and by the top there were only a few in contention.

From there it quickly developed into a 2 horse race between Tom Adams and me, although Chris Birchall, previous winner, was never far off and I know from history he knows all the lines (it cost me dear last year).  After growing up and living in Ilkley most of my life, and having run on Ilkley Moor pretty much every week for at least the past 10 years you’d think I would have a pretty good idea at the route but I can be unreliable at times. But I managed to find the route OK this year, and Tom and I held Chris off despite a late charge by him towards the ruin at CP5.

I really enjoy the last descent from the ruin and tried to run it pretty hard but I couldn’t shake off Tom, so it came down to a sprint finish at which I just held on.

I was surprised to hear how close to the record we had run, although that was probably more due to the superfast dry conditions rather than superfast running!  It is very dry up there at the moment.

Great race and thanks